City backtracks on TVP detour after cyclists call it 'unsafe'

City backtracks on TVP detour after cyclists call it 'unsafe'

The City of London is changing course on a proposed detour during construction on the Thames Valley Parkway (TVP), after the cycling community raised safety concerns.

Initially, the city planned to direct cyclists and pedestrians off the TVP, to a detour north on Talbot Street, across Oxford Street, up to Grosvenor Street, before cutting back west to rejoin the TVP.

“It was just neglect of responsibilities,” says Andrew Hunniford, general manager of the London Bicycle Café.

It was unsafe, he says, because it would have forced cyclists to cross Oxford Street unnecessarily, at an intersection he calls “really dangerous.” 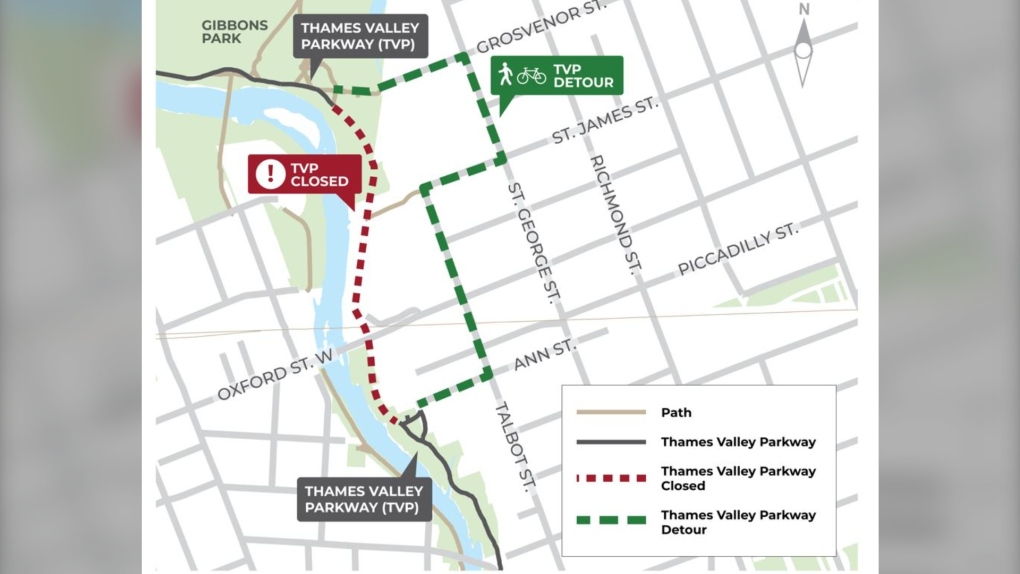 The City of London’s proposed detour route, as seen on its website. (Source: City of London)
Through the café’s Twitter account, he proposed an alternative detour that makes use of the Oxford Street underpass on the west side of the Thames, as well as Blackfriar’s Bridge at the south end of Ann Street Park.

“Does that official detour go under Talbot Street Bridge?” one reply reads. “That tunnel is a death trap for cyclists and pedestrians alike.”

Another comment reads, “The city’s detour looks like a plan designed by people who do not cycle,”

The city says it received feedback from cyclists about the detour route, and has made changes. The detour will now follow Hunniford’s proposed route from Blackfriar’s Bridge up to the Oxford Street underpass.

“New signage will be placed ahead of the construction site to show the new route,” a city spokesperson wrote in a statement provided to CTV News London. “We welcome feedback that will help us make improvements.”

The closure is for construction on underground sewer infrastructure. It’s expected to last until Sept. 30, according to the city.