'Busier than ever, but we can't do the work': province puts a halt to non-essential construction

LONDON, ONT. -- During the provincial-wide lockdown on December 26, all construction projects were given the green light to continue, but just a couple weeks into 2021, non-essential construction has been put to a halt.

That means new home renovation projects that help employ the trade and construction industry are added to the non-essential list for the second time since the pandemic began.

Wayne Clark, owner of, From Top to Bottom Renovations, had his business ventures halted in April for more than two months during the region’s first lockdown.

"It was pretty tough, we got way behind...we’re still playing catch-up and now unfortunately it's going to happen again." 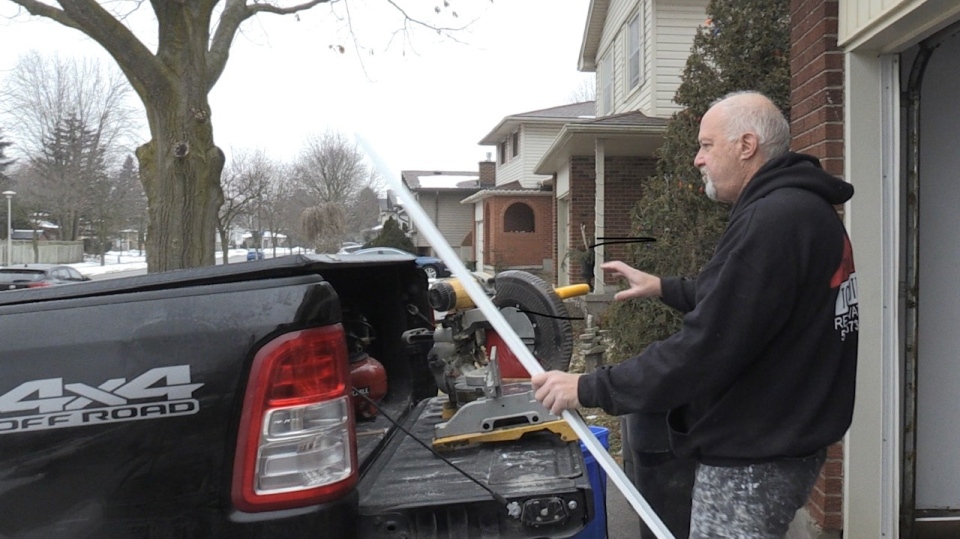 Clark owns a small home renovation business and employs two trade-workers. In the spring he was forced to lay them off.

"We tried to help them out with CERB and unemployment back then."

After the Premier’s announcement, Clark is forced to lay-off the same employees due to lack of work for a second time.

“It’s very tough, it’s very tough. Luckily one (younger worker) still lives at home, so it's not too bad. But the other one has children and now they have to find another way to support their family."

With people working from home, the demand for renovations has boomed. Clark says he has seen more requests for small home renovations during 2020 than ever before.

"We actually are busier than ever, but we can’t do the work."

In the early spring, Clark’s business was backed up for more than two months after lockdown.

Clark says most clients were understanding of the delay.

"It is tough for everyone, I know people in other trades that were able to work, and others who were not and got way behind."

Clark and his employees have been working seven-days straight to play catch-up since June 2020.

As of January, the renovation business is still two months behind schedule.

"Everybody who got pushed out, we pushed another two months, it’s very unfortunate."

Clark says he battles mostly with the impact it has had on his employees’ bottom line.

"It is tough to be constantly telling people that they’re off…. Both of them are just in renovations so they know nothing else. Unfortunately there is nowhere else for them to go then to just sit around and wait to get back to work."

Clark adds that he hopes his business and employees can bounce back as soon as it is deemed okay to do so by the government.

"It is out of our hands. We will get to you as soon as we can, however long this lasts is how long you will be pushed out."

The provincial government is allowing for essential construction and emergency construction projects to continue.

A spokesperson from the City of London tells CTV News that they are in the process of reviewing projects to determine which will proceed and which will be delayed.

"We need time to review them before we determine the specific impacts on municipal projects."

Canadians aren't staying home as much as they did during the first wave, data shows

Ontario reports fewer than 3,000 new COVID-19 cases for first time in a week as more cases of U.K. variant found

Severe cases of COVID-19 could be associated with poor gut health: scientific review

Blood kits sent to 48,000 Canadians to survey extent of COVID-19

Should you be wearing a mask while outside? Experts say it depends