'You are continually worried about getting hit': London cyclists calling for change, organize safe ride to honour student killed in hit-and-run

'You are continually worried about getting hit': London cyclists calling for change, organize safe ride to honour student killed in hit-and-run

A number of London cyclists are calling on the city to implement more safety measures on the roads after a 29-year-old student was killed while riding his bike earlier this month.

Jibin Benoy was killed on the morning of Sept. 18 while riding across the city after a shift at a downtown London, Ont. eatery.

On his ride home, he was struck and killed on Hamilton Road around 4:40 a.m.

The driver fled the scene.

A bike stands in the spot where Jibin Benoy was struck while riding his bike home, as seen on Sept. 27, 2022. (Kim Knight/CTV News London)

Cyclists are planning to meet at the scene of the incident Tuesday evening, then will cycle to London City Hall to ring their bells and make some noise, advocating for safer streets.

“We’ve been asking for a network of protected bike lanes. On Hamilton Road there’s essentially no infrastructure even though it’s a popular route for cyclists,” says David Isaac, an avid cyclist and lawyer in London who plans to participate in Tuesday’s ride.

Issac adds, “If there had been protected bike lanes there this probably wouldn't have happened. We’re tired of this happening, some change needs to happen.”

During a vigil for Benoy last week, Jamieson Roberts had said, “We may not have known him personally, but we know him because we’ve experienced it.”

Roberts, who is also participating in the ride, then told CTV News London that he knows several cyclists who have been hit by a car in the city. 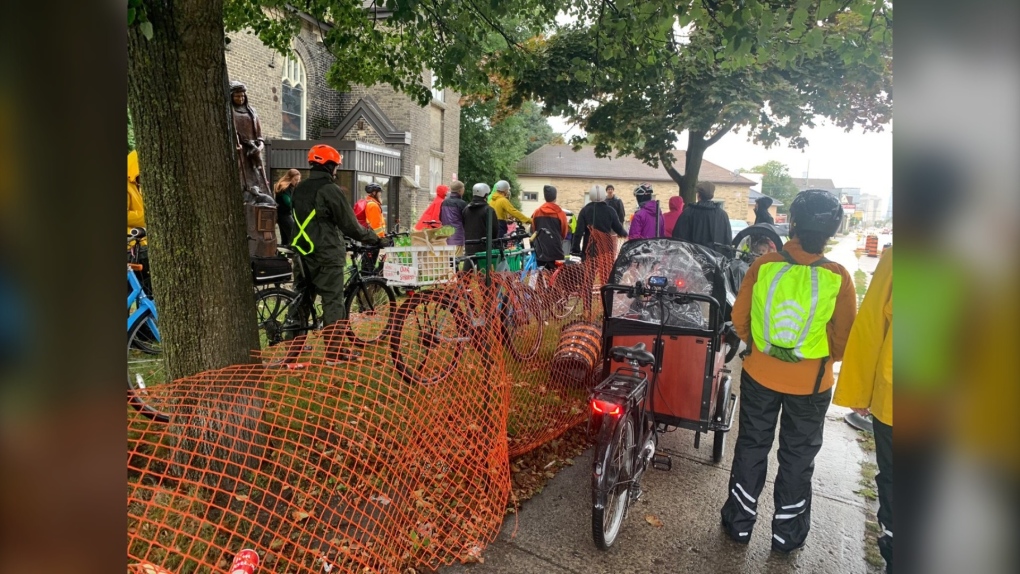 Dozens of cyclists gathered outside in the rain on Sept. 27, 2022 for a safe ride to city hall to honour Jibin Benoy, who was struck and killed while riding his bike on Sept.18, 2022 in London, Ont. (Jenn Basa/CTV News London)

“The average experience of cycling in London is one where you are continually worried about whether you’re going to get hit, when you are not in one of the few spaces where we have protected infrastructure,” he said.

In London, protected bike lanes can be found on Dundas and Colborne streets.

As of Tuesday, London police say they do not have an update on this investigation.

Police say an investigation has found the suspect vehicle may be a dark-coloured sedan with significant damage to the front end, hood and windshield.

Dozens of Muslim philanthropic groups and several civil liberty organizations are urging Prime Minister Justin Trudeau to ensure that the Taxpayers’ Ombudsman office can access all the information it needs to conduct a systemic review of how the Canada Revenue Agency treats and audits Muslim-led charities, after a 2021 report accused the CRA of 'implicit biases and practices.'