Early Sunday morning, downed power lines in Port Burwell, Ont. had Hydro One crews working to get hundreds of customers back on the grid.

"We saw one of our worst storms in recent years," says Richard Francella, a senior communications advisor for Hydro One.

"We saw winds over 100 Kilometers per hour which started Saturday afternoon and really went into late in the evening. What we did see was broken poles, downed power lines, trees on power lines and a lot of outages."

According to the Hydro One outage map, a number of areas in Norfolk County were affected. In Turkey Point, Ont. Cedar Drive was flooded, and nearly every resident was without power.

"There were surges, and the road we're standing on right now had about two-and-a-half feet of water last night," says Jerry Kulyk, a Turkey Point resident.

"It would be up to my knees and was just flowing down. It went out around three yesterday afternoon and we're hoping it will be back on by six (o'clock)."

The heavy winds in Norfolk County kept OPP busy Saturday. A tree fell onto a car which was driving down Blueline Road. The driver was forced to climb through the roof, and officers were shocked it wasn't a fatality.

In Port Dover, Ont., Walker Street was flooded and drivers who went around the Road Closed Signs were stranded.

"Lake Erie can get pretty angry," says Steve Evans, an Ontario Storm Tracker, who was along the lakeshore Saturday.

"You always want to be close to the middle of Lake Erie where you are expecting 20-foot-plus waves," says Evans.

"What was really interesting was the spray kick up from the surface of the water. We were watching it from the U.S. side, and it just got closer so fast. Then boom here come the gusts. Along Highway 24, just outside of Long Point we saw some downed trees and some hydro poles and hydro lines coming down."

Hydro one reports 3,500 outages across the province, and they are bringing in additional crews from other regions to assist. 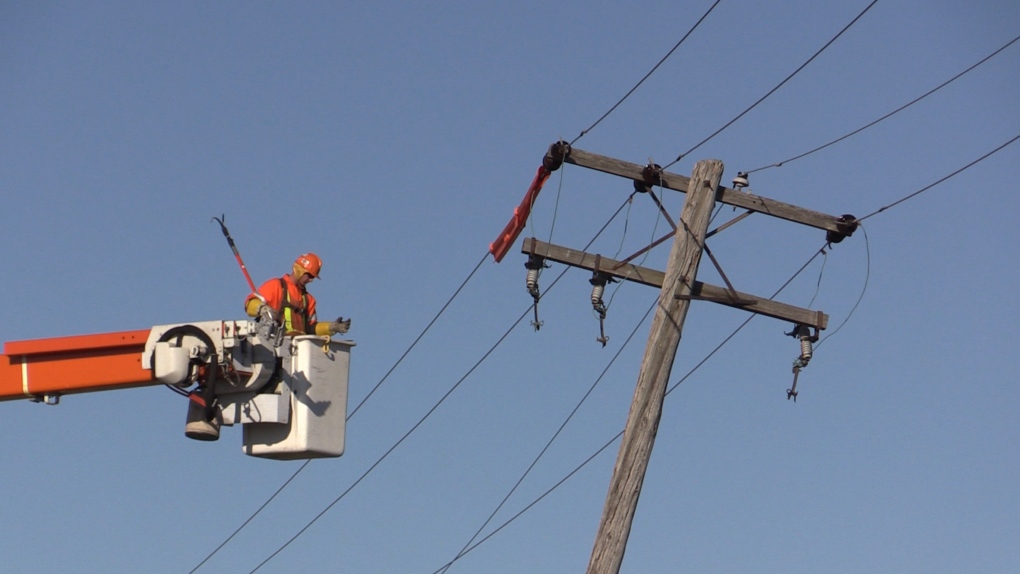 Hydro crews work to fix a broken pole in Norfolk County on Sunday Dec. 12, 2021(Brent Lale / CTV News)"Approximately 450,000 customers were affected by the storm across the province," says Francella.

"Crews continue to work to restore power as quickly and as safely as possible. What we are seeing is a number of smaller outages in those harder to reach areas. So we have helicopters patrolling. We have off-road equipment out there. So our crews are using all tools in the toolbox to restore power."

Francella anticipates many people across Ontario will be without power until Monday night. For those living In Turkey Point, these types of outages have become far too common.

"It's just something that you clean up and you move on and hopefully this is the end of them for a while," says Kuylk.

First Nations leaders in Manitoba are calling for the resignation of Winnipeg's police chief after the force decided to not search a landfill for the remains of two Indigenous women.

Canadian singer Celine Dion was diagnosed with stiff person syndrome, a rare neurological condition with no cure, forcing her to take a step away from her world tour.