Numerous 9-1-1 calls flooded dispatchers shortly after 9 a.m. as a sudden wall of heavy rain and wind hit the city.

The gusts took down power lines in multiple locations, including an alarming incident in a city park off Darlene Crescent.

There, a dangling power line made contact several times causing fiery explosions, cracking and arching of other lines.

London firefighters were sent to monitor the scene before London Hydro crews arrived. 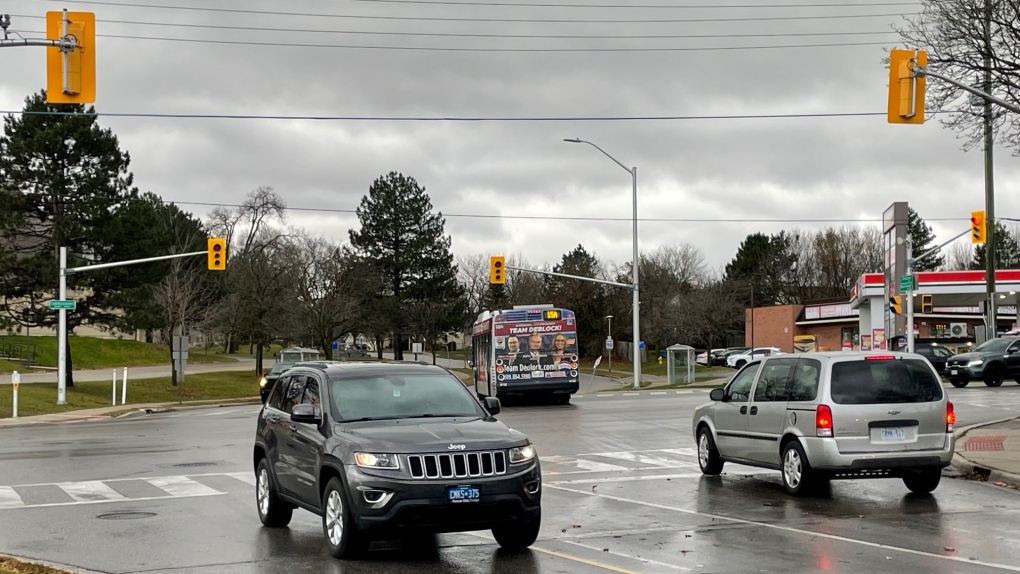 Wicked winds in London, Ont. on Dec. 3, 2022 caused power outages across the city. Traffic lights were down at the intersection of Commissioners Road and Andover Drive. (Sean Irvine/CTV News London)

There were similar reports throughout the Forest City.

In addition, multiple trees in the south end shed branches over residential roadways.

Traffic lights were also knocked out, or were flashing caution following the power bumps.

According to Environment Canada, the fierce winds seen in the London region are part of a wider wind warning issued for much of southern Ontario, with the following local counties included:

The main hazards include strong westerly winds gusting up to 90 km/h in the wake of a strong cold front Saturday morning into the afternoon.

Environment Canada said the strongest winds will last only for an hour or so as the cold front passes.

Winds are expected to ease up early Saturday evening, with sustained winds at 30 km/h, and gusting up to 50 km/h.

Members of the London Fire Department are seen in London, Ont. on Dec. 3, 2022 as a fierce wind storm cut through the region, knocking out power across the city. (Sean Irvine/CTV News London)

According to London Hydro, there are no longer any outages in the city.

Here’s a look at London’s forecast for the rest of the week:

Tuesday: Cloudy with a 30 per cent chance of showers. High of 7 C.

Wednesday: Cloudy with a 30 per cent chance of showers. High of 5 C.

Thursday: A mix of sun and cloud with a 30 per cent chance of flurries or rain showers. High of 2 C.

Cindy Williams, who was among the most recognizable stars in America in the 1970s and 80s for her role as Shirley opposite Penny Marshall's Laverne on the beloved sitcom 'Laverne & Shirley,' has died, her family said Monday.

The Mindbender roller coaster at Galaxyland has been shut down, West Edmonton Mall announced on Monday. The redevelopment of the area is already underway, and the roller coaster is being decommissioned and removed.