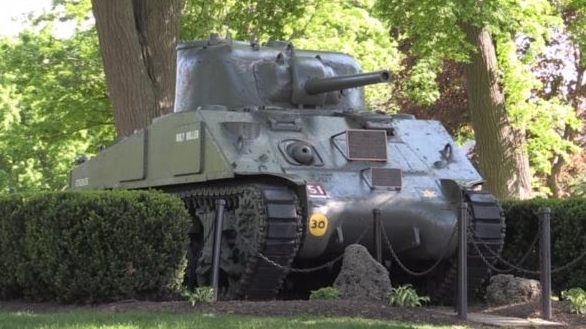 Subsequent years serving as a memorial to the 1st Hussars Regiment in Victoria Park, however, have lead to a different set of dangers.

“It’s an incredible piece of Canadian heritage,” explains councillor Shawn Lewis. “And to lose it because of exposure to the environment would be a real shame.”

Corrosion and vandalism now threaten the monument’s future. A 2017 corrosion analysis revealed that the hull could fail in 10 to 15 years.

On Tuesday, city hall’s Community and Protective Services Committee unanimously supported a plan developed by the 1st Hussars to restore the Holy Roller.

In 2021 the tank would be moved to an indoor restoration site for a complete overhaul, then returned to Victoria Park in 2022 in time for the regiment’s 150th anniversary.

The 1st Hussars indicate they will fund-raise to cover the cost.

“They’re planning on funding it through private donations,” explains Councillor Lewis. “Hopefully we (city hall) can beautify the space that it occupies in the park, and around it.”

The Holy Roller fought during the liberation of France, Belgium, and Holland.

The Sherman tank is one of only two Canadian tanks to survive from D-Day until the end of the war.

Council will make a final decision about the restoration plan next week.