LONDON, ONT. -- Raymond David thought that sleeping in a military tent behind Beth Emanuel Church would give him a reprieve from London's typical rough winter nights.

"Instead of sleeping by the river and being attacked by raccoons every night, that sounded great," says David.

The Londoner was hoping to be part of the Urban Haven Project's (UHP) "intentional journey for men" program, but when the church's insurance company cancelled their policy for erecting the tents, he wasn't sure what would be next for him.

Luckily Dan Morand, the founder of the UHP was able to secure insurance if he moved the program back inside the church.

"The whole point of the program is to find men who weren’t satisfied with being homeless, jobless or those who wanted addiction help," says Morand.

With the tents, they could have accommodated many more, but inside they are limited to just 10 men.

David, who has been couch surfing for years, is one of them. Ever since being attacked during a home invasion in 2007, he's suffered from Post-Traumatic Stress Disorder (PTSD).

"One night I remember going to my door, unlocked it, and nothing else after that," says David. "I woke up in the hospital with broken jaw, broken eye socket and can't remember anything else."

He's appreciative that the church chose him to be part of the program. 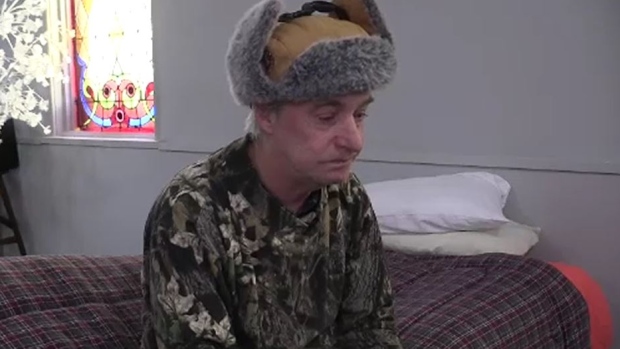 "To find an affordable place in London is difficult," adds David. "The last place I rented was $750 a month and it not only used my Ontario Disability Support Program (ODSP) rent money, but some of my living income as well. To see an organization like this step up, it's amazing."

David is the oldest temporary resident, while an 18-year-old man who wished to be identified only as "Dave" is the youngest.

A video-gaming addiction led to sleeping, eating and rage issues and ultimately trouble with the law. He's finding stability within the church community.

"It’s not just help you get, but the stories and testimonies you hear from people who have been in far worse situations," says Dave.

Dave is in the process of applying for ODSP and stable housing. But for now he's happy to have a safe place to sleep.

"If I wasn't here, I'd assume I'd be a shelter, doing who knows what to survive," says Dave. "Dan isn't just giving us a roof over our heads, he's trying to help us get out of our situation, not just survive it."

Morand sees the appreciation in the faces of all of the men he's housing. They make their own beds each morning, and keep the church clean.

"We aren't just a shelter, we want to take them from homelessness to life of purpose," says Morand who is the pastor at Beth Emanuel Church.

"We have guys going back to work, and we are losing two guys this week to places where we have them housed. We are at halfway point, and the goal by the end of March is to have them appropriately placed before we are done."

Even though they never got to use the military-style tents, for these 10 men, the hospitality is still pretty great.