'We are all with you': Trudeau in London for 'Our London Family' community events

'We are all with you': Trudeau in London for 'Our London Family' community events

Speaking at an emotional march in London, Ont., marking the one-year anniversary of a deadly attack on a Muslim family, Prime Minister Justin Trudeau told those gathered that Islamophobia is “an attack on all Canadians.”

The prime minster participated in a number of community on events Sunday, which began with a roundtable discussion with students at Oakridge Secondary School in the early afternoon.

Trudeau was later joined by London Mayor Ed Holder, Afzaal family members and Transport Minister Omar Alghabra, and were in attendance for a rally that began later that day.

“Since the evening of June the sixth, I’ve truly struggled to find the right words — how to properly express on behalf of our city the magnitude of what happened to that beautiful family,” said Holder.

Holder then introduced Trudeau, who took the stage outside Oakridge Secondary School to a crowd of approximately 2,000 people to talk about the memories of the Afzaal family and the dangers of Islamophobia. 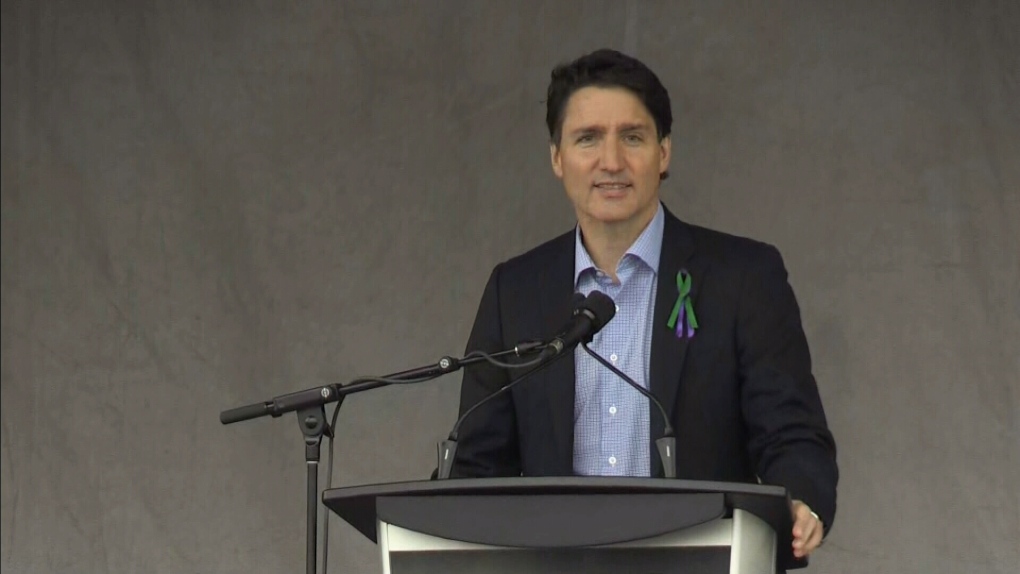 Prime Minister Justin Trudeau took the stage at Oakridge Secondary School to speak ahead of a march to the London Muslim Mosque on June 5, 2022 in honour of the Afzaal family. (Jim Knight/CTV News London)

“We are gathered here to honour the victims of this horrible tragedy," Trudeau said. "Three generations of the family were taken by brutal, cowardly and brazen act of terrorist violence. We remember them. Some of you were her [Yumnah’s] classmates — I know you miss her deeply."

Trudeau said that millions of Canadians face microaggressions and racism daily in Canada, adding that the siutation must change. He said his government has taken action to address racism in Canada, but there is still work that needs to be done.

“We need to be there to clearly say this is unacceptable, this is wrong,” he said. “We also need to act.”

During the speech, Trudeau said it sent a strong message to see so many people in attendance at the rally, and that Canada’s diversity and openness is what makes Canada great.

Trudeau also spoke to the harm and divisiveness of disinformation, and said it’s up to everyone to speak up and call it out. He said that words matter because they lead to action, and action is what lead to thousands of people gathering in London Sunday for the Afzaal family. 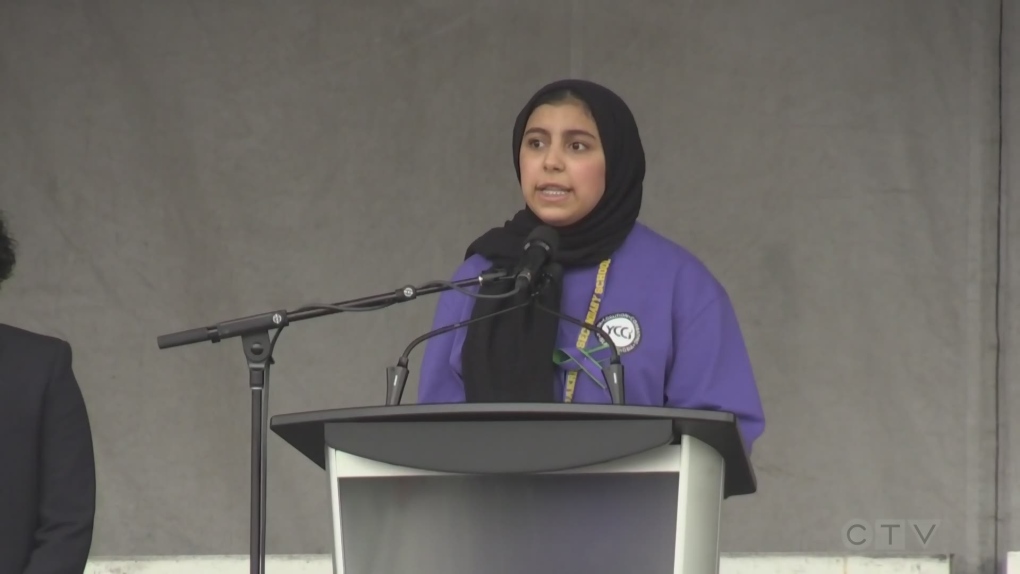 “In the awake of the attack that took my cousin Yumnah and her family’s lives last year, I was left with a responsibility — a responsibility to ensure that no one would ever have to wake up in the morning to hear that members of their family were murdered the night before, solely because of their faith or how they looked.”

Yumnah’s friend Maryam Al-Sabawi talked about how she lost her sense of belonging, community and sense of self.

And Al-Sabawi had one final message for the prime minister.

“To our Prime Minister Justin Trudeau, I turned 16 this year...you have two years to earn my vote.”

Following the conclusion of the speeches, there was a community-led march through the streets of London, beginning at Oakridge Secondary School and culminating at the London Muslim Mosque. 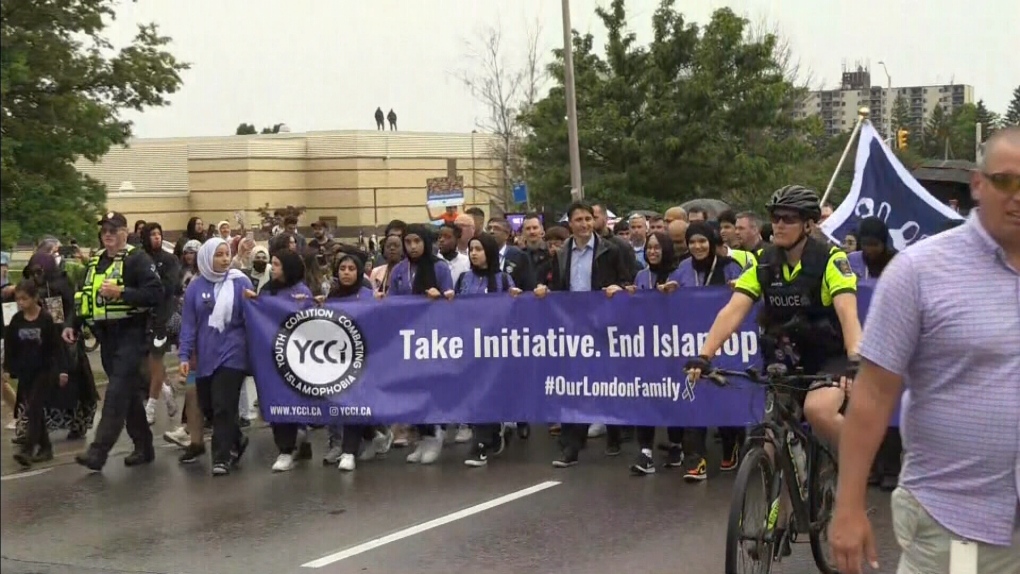 Prime Minister Justin Trudeau and members of the community march from Oakridge Secondary School to the London Muslim Mosque in London, Ont. on June 5, 2022. The event is being held to commemorate the first anniversary of the deaths of the Afzaal family, which happened on June 6, 2021. (CTV)
According to the City of London, there will be traffic impacts on Sunday with Oxford Street between Hyde Park Road and Wonderland Road being closed during the march — the street has since reopened to the public.

Salman Afzaal, 46, his wife Madiha Salman, 44, their 15-year-old daughter Yumna and her 74-year-old grandmother, Talat Afzaal, died after police say they were deliberately hit by a truck during an evening walk on June 6, 2021, in London.

The family's nine-year-old boy was seriously injured, but survived.

A 21-year-old man faces four counts of first-degree murder in what police say was allegedly an attack motivated by hate. The case has not yet gone to trial.

Ahead of the March today for #OurLondonFamily, Prime Minister @JustinTrudeau met with youth to talk about the importance of the day. #LdnOnt pic.twitter.com/F8vgL10wTZ

Rescue crews piloted boats and waded through flooded streets Thursday to save thousands of Floridians trapped after Hurricane Ian destroyed homes and businesses and left millions in the dark. The destruction began to come into focus a day after Ian made landfall in Florida as one of the strongest hurricanes ever to hit the U.S.

The Toronto Blue Jays secured a playoff berth Thursday without even taking the field.

The RCMP says Jeremy MacKenzie's arrest was not influenced by Conservative Leader Pierre Poilievre's request to have the Mounties look into comments about his wife.

Quebec's immigration and labour minister claims that newcomers to the province "go to Montreal, don't work, and don't speak French," though he later tweeted he expressed "his thoughts badly."

1 in 4 Ontario farmers contemplated suicide in past 12 months: study

There’s no way around it — Farming is one of the most stressful occupations on the planet. “Seventy six per cent of farmers are self identifying as having moderate to high stress levels. In general, that is much higher stress levels than the general population,” said Ontario Federation of Agriculture President Peggy Brekveld.

FinTok: How TikTok is changing financial literacy in Canada

Financial TikTok – or FinTok – has become one of the most popular trends on the platform, and is emerging as a go-to resource for Gen Z and millennial audiences looking to learn how to invest, budget or even spend more wisely.

Russia to annex more of Ukraine on Friday at the Kremlin

Russia planned to annex more of Ukraine on Friday in an escalation of the seven-month war that was expected to isolate the Kremlin further, draw it more international punishment and bring Ukraine extra military, political and economic support.

A rift has emerged in the Danish royal family following a decision by Queen Margrethe to strip four of her eight grandchildren of their royal titles in order to "future-proof" the monarchy.