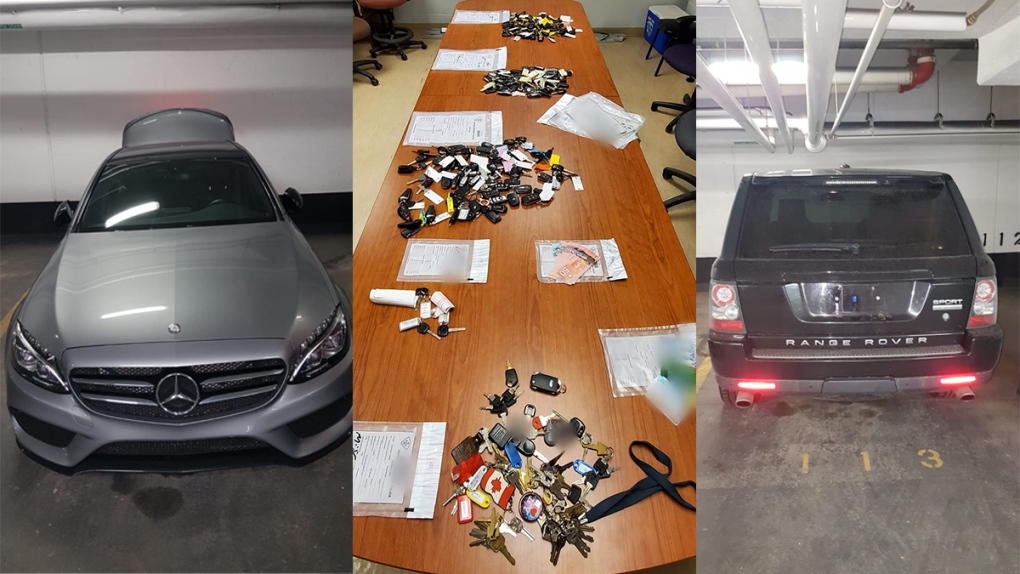 Vehicles and piles of keys stolen from car dealerships in London and Middlesex County, Ont. are seen in this image released by OPP on Monday, May 4, 2020.

MIDDLESEX COUNTY, ONT. -- Two men and one woman have been charged in connection with a series of break-ins at multiple car dealerships in London and Middlesex County.

The first incident appears to be one that occurred in the early morning hours of April 17 at South West Auto Group at 1210 Wharnchilffe Rd. S. in London, Ont., where a pickup truck and multiple key fobs were stolen.

Then on the morning of April 25, 519 Cars, located at 1905 Wharncliffe Rd. S. was broken into, with three vehicles and multiple sets of keys stolen.

Provincial police say between April 24 and 29, keys, documents and vehicles were stolen from a number of dealerships, both in London and Middlesex County.

Middlesex County OPP say they have now recovered eight stolen vehicles, over 175 keys and documents after a pair of arrests on Thursday.

The property was recovered after a search warrant was executed at a motel in Mississauga, Ont. on April 30, where two suspects were taken into custody.

Two men, a 32-year-old from St. Thomas and a 26-year-old from Oneida Nation of the Thames, as well as a 31-year-old London woman are each facing a number of charges laid by both London police and OPP.

London police have charged the two men jointly with:

The Oneida Nation of the Thames man has been charged by OPP with; possession of property obtained by crime over $5,000, operation while prohibited under the Criminal Code, break and enter, and mischief under $5,000.

Officials say the investigation is ongoing, and encourage dealerships and companies with fleet vehicles to look at their key storage practices to enhance security.

All three suspects are being held in custody with a future court date in London.