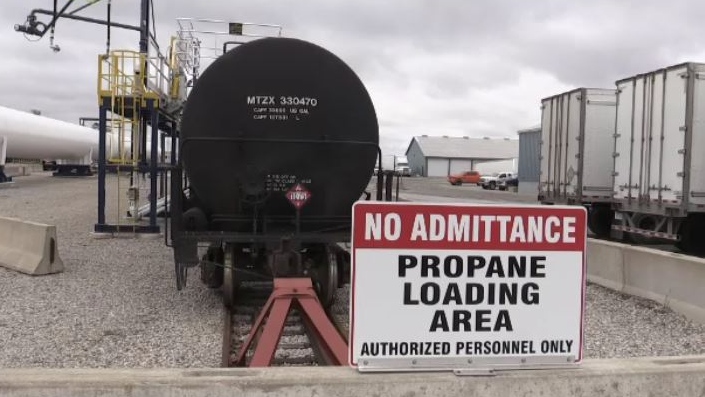 LONDON, Ont. -- As the CN Rail strike enters week two, the head of the Canadian Propane Association says the situation has reached a critical point at the same time as local farmers are running out of propane.

The majority of propane is shipped by rail to local terminals so the strike means supplies are not being delivered across the country.

“People are working on alternatives and trying to get supply in any way, shape or form from different places including the U.S.,” says association CEO Nathalie St.-Pierre.

Propane supplies to farmers for crop drying have been cut off so that critical operations have access, she says.

“Everybody is really working hard to support the farming industry. At the same time, bearing in mind that we are in the winter almost and people want to make sure they have supply for their homes and livestock as well.”

Grain farmers' supplies in the London region are quickly drying up.

“Some of our farmers (are) out of propane as of this morning. Some will have it until tomorrow,” says Elgin-Middlesex-London Conservative MP Karen Vecchio.

Vecchio says there are homes in her riding that heat with propane. “Not all of my constituents have natural gas. Parts of Central Elgin don’t have it. Some of the Dutton-Dunwich area don’t have it. I’m beginning to get emails coming through. If things don’t change with the strike, then the long term will be home heating as well.”

About 3,200 CN rail workers went on strike last Monday. They have been without a contract since July 23.

The federal government says it prefers to let the bargaining process continue.

London West Liberal MP Kate Young says this is a difficult time for all businesses that use rail to transport their goods, “But we as a government believe in the collective bargaining process and our mediators are still working with the parties. We are monitoring it.”

St.-Pierre wants both sides and the government to know that a solution is needed quickly. “The pressure has to be on all the parties to come to the table and find a solution.”

Meanwhile, she says a propane shipment left Edmonton Friday with about 50 rail cars of propane planned for Ontario and some expected to arrive in Quebec on Monday.