Siren panic: anxiety over hearing approach fire trucks may have contributed to a collision

It was a situation where it appears good intentions led to a bad outcome.

Dashcam video posted to social media shows traffic converging at the intersection of Hamilton Road and Highbury Avenue on Tuesday evening when a fire truck can be heard approaching.

A southbound vehicle in the left turn lane tries to make the turn to clear a path for the fire truck, but the vehicle is hit by a northbound car.

The turning vehicle takes a glancing blow, the northbound vehicle slows and pulls to the side of the road. Reports indicate there were no serious injuries.

He understands that vehicles are encouraged to safely pull to the right and stop but he says the most important part is simply to stop, and remain stopped.

"In this case, where we were. We were in the hammer lane, able to make a turn around them so it's best they stay right where they are."

He says if emergency responders need a vehicle to move they’ll indicate where to go in order to keep everyone safe. 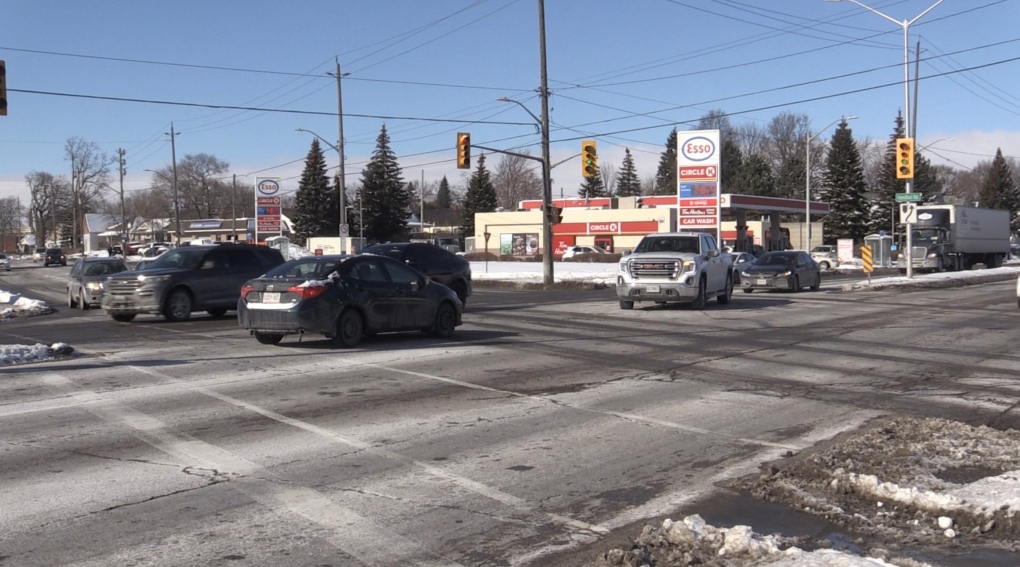 Intersection of Huron Road and Hamilton Road in London, Ont. on Jan. 26, 2022. (Gerry Dewan / CTV News)“Our firefighters are trained at a very high level to respond to emergency situations, and to also gauge the behaviours of other drivers.”

In the circumstance on Tuesday night, firefighters had to abandon their initial response to check on the occupants of the two vehicles.

Mosburger says it’s a concern if crews are being diverted from a more significant emergency, such as a medical emergency or a working fire.

Highbury Avenue and Hamilton Road consistently makes the list of intersections with the highest number of collisions.

The intersection has high traffic volumes and vehicles heading north on Highbury from Highway 401, going from a 100 km/h zone, down to 50, but drivers don’t always make the adjustment.

The southbound left turn lane also has a significant offset where drivers are often seen doing the “creep-and-peak,” looking for oncoming traffic. In some cases, they simply wait for the light to change, not wanting to take the chance.

Aiham Alshalabi works for a food delivery service, occasionally picking up orders from restaurants at the corner of Highbury and Hamilton.

He says he has learned to treat every intersection with extreme caution, "I want to pay attention to my mistakes and to others mistakes.”

The city says the intersection is currently being studied, with the goal of making safety improvements but that work isn’t expected to get underway until at least 2029.

Transport Minister Omar Alghabra says the federal government is working with groups on the ground to resolve air travel 'bottlenecks' in time for a busy summer.