Putting a stop to serious crashes: Roundabout work gets underway

Putting a stop to serious crashes: Roundabout work gets underway

Construction is underway at a Lambton County intersection just north of the 402 and east of Sarnia, along Egremont Road.

It was last summer that Ron and Deb Tetreault heard a sound that has become all too familiar to them — the couple lives on the northwest corner of Egremont and Nauvoo Road.

"My husband and I were out here working in the yard,” Deb recalled. “We heard the brakes and we heard the crash and looked and saw a car in the air. It hit a telephone pole and came down on its top."

Deb Tetrault is a former emergency medical technician and ran to help the injured, and told CTV News London, "I told my husband, ‘Grab some towels, wet them down, [and] bring them over.’ I just know that you've got to keep the patient calm."

It wasn’t the first time the couple had to call 9-1-1 and tend to injured during their 15 years living there.

Even when cars aren't colliding with each other, there are constant close calls. That is in spite of all the safety measures already in place at the intersection to alert people of a stop, including rumble strips about 300 meters from the intersection and an oversized stop sign with a flashing red light.

"There's times when I go like this,” Deb said, raising her arms to her head and cringing. “Because you see them not stopping."

Ron Tetrault said the intersection gets a mix of traffic, including daily commuters, commercial trucks and vacationers heading to beaches and campgrounds along Lake Huron.

"It doesn't matter, from semis to truck campers and trucks, I'm just amazed, during the day they just run right through that stop sign,” he said. 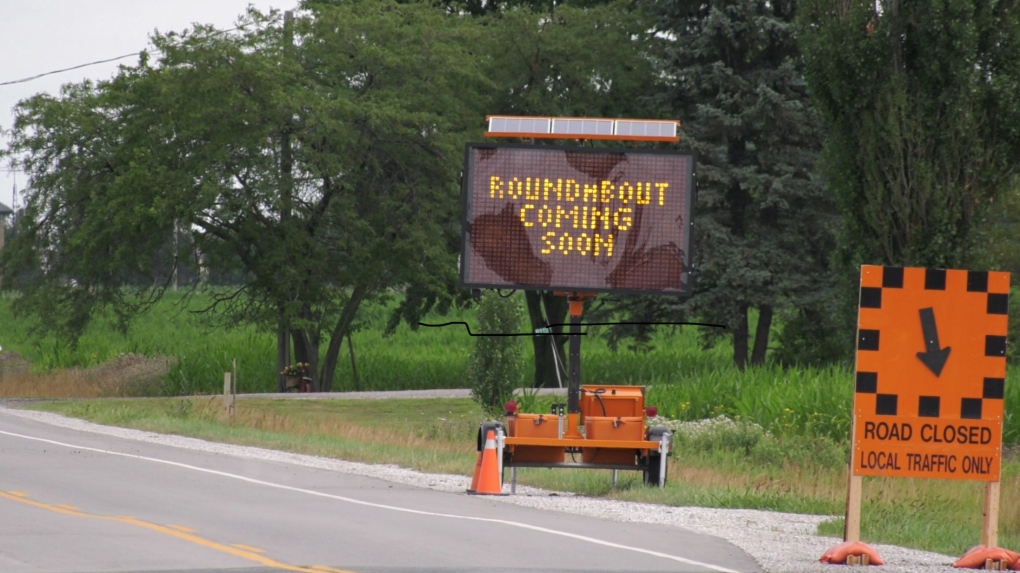 A traffic sign announces the closure of an intersection at Egremont Road and Nauvoo Road in Lambton County where construction of a roundabout is now underway. (Gerry Dewan/CTV News London)
The new roundabout will cost about $3.3 million to build. It will be designed to handle the variety of traffic that comes along Nauvoo, including big rigs diverted off the 402 when there are collisions and local farm equipment.

"They took into account large equipment,” said Glen Hamill, construction supervisor for the County of Lambton. “We can keep the speed limits up. Although it's a busy intersection, it's not that busy. There's 4,000 vehicles a day typically, four to five, so it's really going to keep them moving. The biggest thing is it's going to keep them safe."

Deb Tetrault believes the roundabout will help avoid the high-speed T-bone crashes that so often result in serious injuries or death.

"This roundabout, I believe, is going to be a good thing to stop those kinds of tragedies,” she said.

It will require some patience for area drivers. Construction is expected to extend into October, with the intersection closed to all traffic the entire time.

This is the second roundabout in Lambton, and Hamill said more are being considered but no decisions have been made yet about where or when the next one might be built.

A series of unusual leaks on two natural gas pipelines running from Russia under the Baltic Sea to Germany triggered concerns about sabotage Tuesday, overshadowing the inauguration of a long-awaited pipeline that will bring Norwegian gas to Poland to bolster Europe's energy independence from Moscow.