Enbridge Gas, supported by London Hydro and the City of London, is running a limited-time pilot program that provides up to $3,200 in incentives for homeowners to install a hybrid heating system with smart controls.

“It’s Vvery similar to an air conditioner, but what it does, it has the benefits of air conditioning. But it can also operate in reverse, if you will, so it can also provide home heating,” says Tom Grochmal of Enbridge Gas.

West London couple Sheri and Pat DeMester made the switch two weeks ago.

“Our house is at the age where it needed a furnace and air conditioning replacement, so we already needed to make a change anyway,” Pat says, adding his wife Sheri came across an ad for the incentivized program and became interested.

“That just kind of got my attention, it’s like oh, lets see the research on these heat pumps and see what they’re all about,” she explains.

Enbridge says the DeMesters are the type of homeowners with older heating and cooling systems they are targeting with this, but it is open to anyone who would like to make the switch, stressing it is a limited time offer.

“We’re offering it to 100 customers because it’s an introductory offer,” says Grochmal. “In exchange we’re asking homeowners that they complete some surveys, and that they operate this as intended for a period of two years.”

That data is going to help inform not only Enbridge but London Hydro as well. The City of London’s involvement is purely getting the word out to encourage homeowners to lower their carbon footprint.

“Home heating is the second largest source of greenhouse gas emissions as a whole,” says Jamie Skimming from the city. 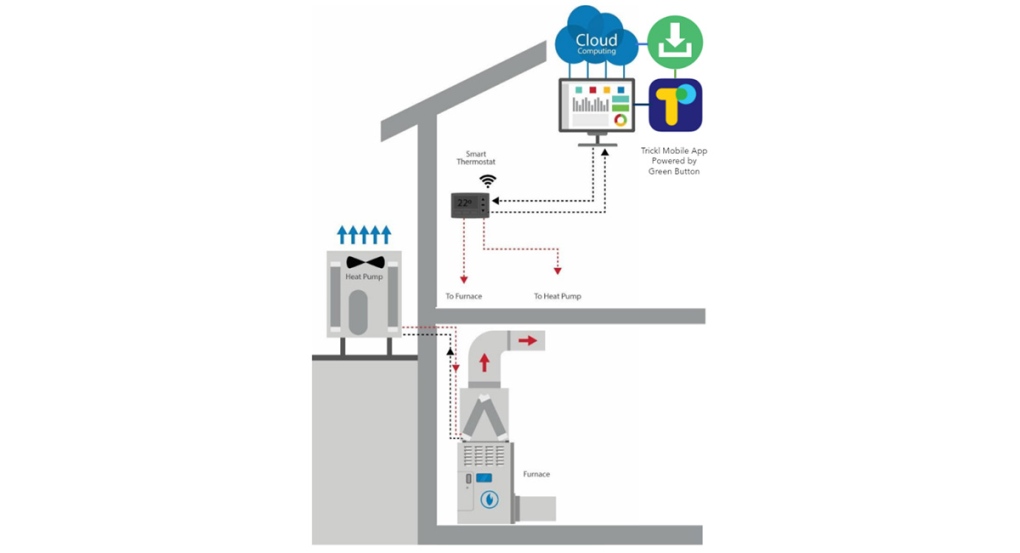 An illustration of a new, electric air-source heat pump and an existing gas furnace operated by a smart controller that uses variables such as temperature and the pricing of gas and electricity to determine the most efficient way to heat a home. (Source: City of London)

With a hybrid heating system, the electric air-source heat pump - which is capable of both heating and cooling your home - replaces your current air conditioning unit.

In warmer weather, the heat pump extracts heat from your house to provide efficient cooling. In cooler weather, it runs in reverse to extract heat from the outside to warm your house. When the weather gets colder (below -2.5C), the system automatically switches to your existing natural gas furnace.

A new hybrid heating cloud-based system used in this program can consider variables such as the pricing of gas and electricity or the effect of weather on equipment performance.

To take part in the pilot project, which can provide up to $3,200 in incentives from Enbridge Gas, residents must:

For more information, residents can contact Enbridge Gas at: hybridheating@enbridge.com

The Buffalo Police Department late Sunday released the names of the 10 victims killed in the shooting. Three people were also wounded.

One of Canada's most renowned Second World War flying aces, James "Stocky" Edwards of Comox, B.C., has died at the age of 100.