Birdie is a delightful, happy dog, with a complicated and expensive health history. It’s from a congenital birth defect, which means she doesn’t gain weight, has miniature eyes and an altered gait.

“The most recent blood work for Birdie cost us $600, and that’s on top of the $3,800 in bills we already have for her,” says the founder and owner, of Adopt-A-Pet Pet Rescue Lucknow, Kathi Newell-Nicholson.

Birdie is one of 20 dogs and more than 70 cats in Newell-Nicholson’s care. As an animal lover, she founded Adopt-A-Pet Pet Rescue in Lucknow, Ont. 24 years ago. She’s accepted hundreds of pet surrenders over the years, but “pandemic pets” have pushed her pet rescue to the limit. 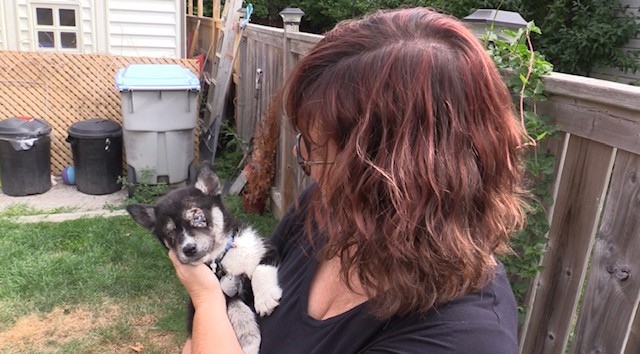 “A lot of people bought animals that were ill suited to them, and a lot of the dogs weren’t trained or vetted, so now they’re wanting to give them up to rescues, but rescues just don’t have the capacity to take more owner surrenders in,” she says.

With just a handful of foster homes for her nearly 100 surrendered pets spread across Southern Ontario, Newell-Nicholson is need of some help, whether it’s volunteer drivers, foster homes, food, litter, or simply money.

“The vetting and food bills are really a lot more than the adoption fees, ever are,” she says.

With foster homes as far away as Guelph and London, Newell-Nicholson says along with taking in Ontario pet surrenders, she’s also worried about Canadian and international pets, now that Canada is banning dog imports from 100 countries, starting in September.

“Some of those countries have bounties on these dogs, where you can bring them the tail, like a coyote bounty here. They will poison them, and put glass in their food, as well,” she says.

Newell-Nicholson says she simply needs some help to keep up with the growing pace of unwanted pets, both in Ontario and abroad.

“I’m an animal lover. I just don’t want to see an animal put down, if there’s another option,” she says.

To learn more about Adopt-A-Pet Pet Rescue Lucknow, you can visit the Adopt-A-Pet website or visit them on Facebook.

Quebec's major party leaders are making one final appeal to voters ahead of Monday's provincial election.