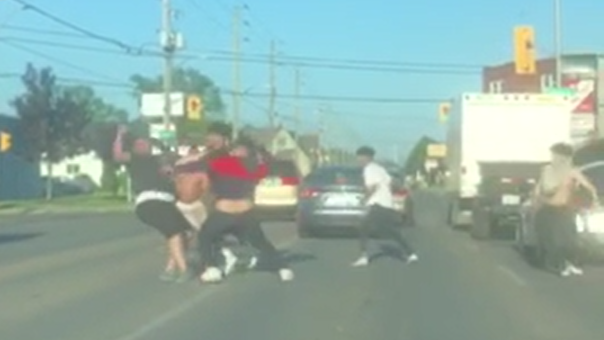 Several men fighting at the intersection of Adelaide and Hamilton in London, Ont. on Tuesday, May 26, 2020. (Reddit u/TinaGibbins9876)

LONDON, ONT -- It’s not something you see every day driving through the city, a brawl in the middle of a busy intersection, but that’s exactly what some Londoners came upon Tuesday evening.

A video posted to reddit shows several men engaged in a fight at the intersection of Adelaide Street and Hamilton Road.

At one point one person appears to be thrown to the ground in between stopped traffic.

Eventually everyone involved gets into separate vehicles and leaves the scene.

Despite the violent nature of the video London police say no charges will be laid.

“Police were contacted at approximately 7:15 p.m. in relation to a disturbance in the area of Hamilton Road and Adelaide Street. Police located all parties involved and all were spoken to. After speaking to everyone, it was deemed to be a consensual fight and no charges were laid as a result,” said Const. Sandasha Bough in a statement emailed to CTV News.

It is not immediately clear what led to the fight.

Some commenters on the post suggested it may have been a road rage incident, but that has not been confirmed by police.

You can watch the full video courtesy of reddit user u/TineGibbins9876 below:

Hamilton and Adelaide 1 hour ago from r/londonontario