When the snow started falling just before kickoff, Keon Edwards had his backup shoes ready.

"They were right inside the door," says Edwards, who endured the elements and ran the ball for a whopping 260 yards vs Queen’s in the Yates Cup game.

"Once it snows you are going to have to run the ball a lot, and there is nothing better than cold-weather football."

Western led 13-7 at the half, but second half adjustments led to a power running attack and a 44-16 win over their rivals from Kingston in a rematch from the 2021 game.

The win was the 34th in school history, in their 44th appearance in the Ontario University Football Final.

"Keon is an every-game player," says Mustangs head coach Greg Marshall when asked if Edwards steps up in the big games.

"He's that type of player that is easy to coach. He’s unselfish; it's always about the team and not about Keon. He is a great leader on our team, who leads by example all the time, I'm so proud of Keon."

"Keon’s the best back in the country, and we have the best O-line in the country that create those holes for him with the weather, we’re super proud of this team," says Evan Hillock who threw for 222 yards and three touchdowns. 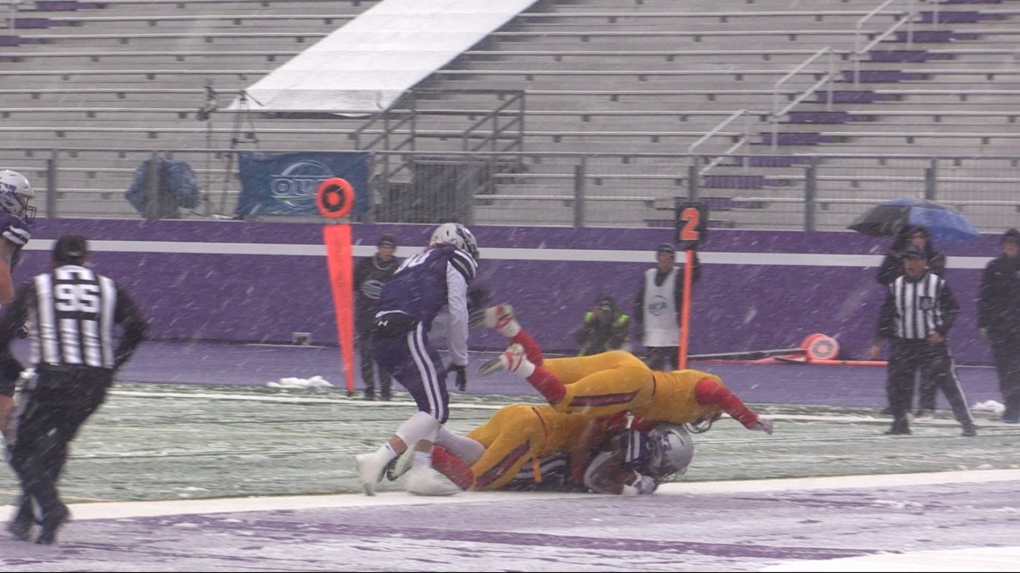 Keon Edwards dragged two defenders into the end zone for a touchdown in Western’s 44-16 win over the Gaels in the Yates Cup on Saturday Nov. 12, 2022 (Source: Brent Lale/CTV London)The Mustangs had some difficulty holding onto the ball in the first half, but after adjustments they dominated.

It’s another championship for Western head coach Greg Marshall, but he says winning never gets old.

"You asked my wife, I didn’t sleep last night. I’m grouchy in the morning, I get to work early. I think I have been in over 30 of these and you’d think you get used to it but you don't. Winning it is just as exciting as it was 30 years ago."

"When we start the season we know what our end goal is," says Marshall.

"You can’t get there without winning the Ontario Championship. It’s huge, and we know we have a couple more weeks, but we’ll enjoy this one tonight."