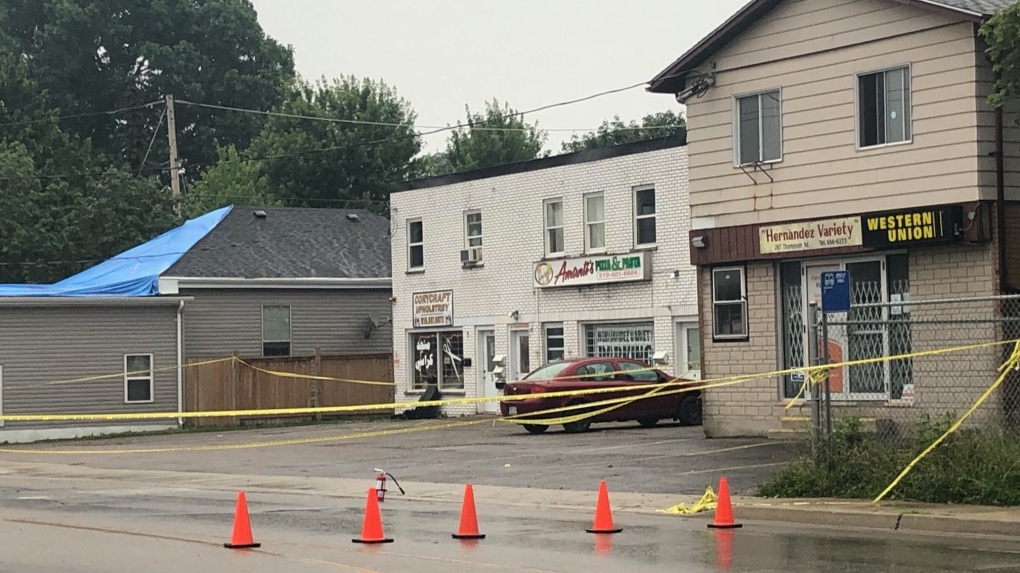 One lone fire extinguisher sits on the road and a fire prevention car sits with three other police vehicles at the scene - Saturday June 24, 2021 (Jordyn Read / CTV News)
London, Ont. -

A 33-year-old London man has been charged with attempted murder following a weekend incident that saw a man severely injured after he was allegedly set on fire intentionally.

Around 5:15 p.m. Saturday, officers were called to the area of Thompson Road and and Jaqueline Street for a serious assault.

Police say a man was intentionally set on fire during an altercation. A 66-year-old man remains in hospital with life-threatening injuries.

A suspect was arrested at the scene. A knife and some ammunition were seized.

On Monday police announced Kristifor Jiva Radovanovici, 33, of London, has been charged with attempted murder, two counts of breach of probation and six counts of possession of firearm or ammunition contrary to prohibition order.

Radovanovici remains in custody and will appear in court Monday.

A rescue operation underway for 39 people stuck underground at Vale's Totten Mine in Sudbury, Ont., has successfully retrieved 27 miners.

The FBI-led search for Gabby Petito's fiance is scaling back but becoming more targeted on intelligence, police say

The FBI is scaling back its search for Gabby Petito's fiance, Brian Laundrie, to be more targeted based on intelligence after officials spent more than 10 days combing through a 25,000-acre nature reserve, police in North Point, Florida, said Monday.

Canada has now fully vaccinated 80.09 per cent of the country's eligible population.

Simone Biles says she 'should have quit way before Tokyo'

Four-time Olympic gold medalist Simone Biles says she 'should have quit way before Tokyo.' Arguably the greatest gymnast of all time, the 24-year-old endured mental health battles and the unexpected loss of a family member during the Tokyo Olympics this summer.