Three members of the London Devilettes have returned home after winning the gold medal at the U18 Women’s World Hockey Championship against the U.S.

Madison Chantler scored the winning goal in the semi-final game against Sweden to get Canada to the final.

“We’ve all dreamt about this ever since we were little and to be able to do it together is an incredible experience," said Chantler.

Jocelyn Amos scored the third Canadian goal in the gold medal game, while the third member of the Devilettes, Emma Pais, scored in the quarter final game against Slovakia.

“You dream about it but it always seems a little far-fetched but for it to actually happen, especially coming off another COVID year it's really exciting for all of us," Pais said.

The three athletes were met at London International Airport on Tuesday night with open arms as dozens of their friends and fellow teammates welcomed them home. 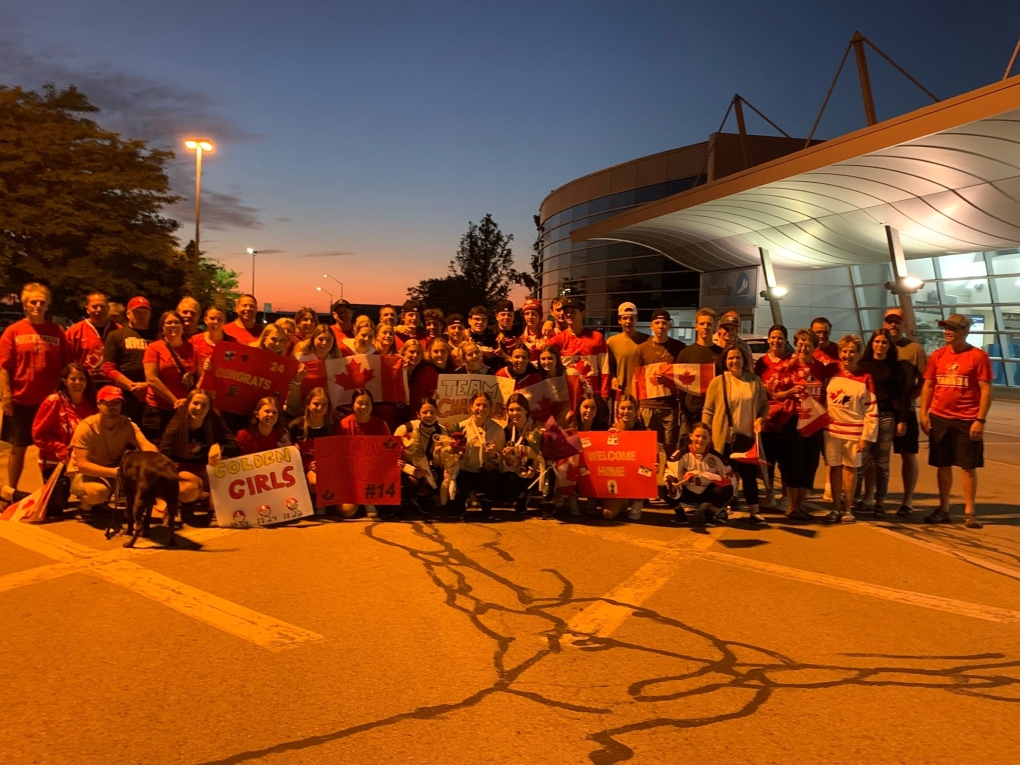 Three members of the London Devilettes received a warm welcome by family and friends at the London International Airport, June 14, 2022. (Source: Madison Chantler) The women’s U18 tournament was cancelled in January due to COVID-19 concerns, leading to doubts that it would run again, said Amos who was named one of Canada’s top three players in the tournament.

“We were all very hopeful but we didn't want to hold out for hope for too long. Then when we saw it was being rescheduled we were all pretty excited for the selection camp again,” she added.

Amos and Pais both plan to play with the junior Devilettes this fall.

But next year, Amos will move on to play at Ohio State. While Pais plans to go to Colgate University in the U.S., she told CTV News she is open to more opportunities with Hockey Canada.

“We never thought it would happen so to see it happen. It really changed our lives," said Chantler.

Convoy participant Pat King was involved in the planning and logistics of the Freedom Convoy protest, despite denials of his participation by organizers, according to court documents obtained by CTV News.

A shooter fired on an Independence Day parade from a rooftop in suburban Chicago, spraying the crowd with gunshots initially mistaken for fireworks before hundreds of panicked revellers of all ages fled in terror. At least six people were killed and at least 30 wounded.

Two climate change protesters were arrested after they glued themselves to the frame of a famous John Constable painting hanging in Britain's National Gallery, the central London museum and police said.

The 30 NATO allies signed off on the accession protocols for Sweden and Finland on Tuesday, sending the membership bids of the two nations to the alliance capitals for legislative approvals -- and possible political trouble in Turkey.