Residents and workers were evacuated from an east London neighbourhood temporarily following an auto shop fire on Wednesday.

The fire department had to bring in heavy equipment to demolish the building and were concerned smoke could be sucked into the ventilation systems of nearby buildings because of the wind direction.

London police say all businesses and residents on Childers Street, Ashland Avenue and Langmuir Avenue between Wilton Avenue and Brydges Street were evacuated.

The order was lifted for most residents by around 6 p.m., but police say Childers Street remains closed until further notice.

Smoke could be seen billowing high in the air from the building housing Actions Auto Repair.

Additional crews had to be called in to help contain the fire, and about seven engines as well as an aerial ladder were on scene at the height of the blaze around 1 p.m.

Fire officials say it was a difficult fire to manage due to the number of accelerants like gas and oil in the building.

Rick Jefferson with the London Fire Department says "There's lots of flammables, 30 tires, three vehicles including a large tow truck and used motor oil, which would be one of the things that you worry about the most."

Nearby trailers containing spray foam had to be moved away from the building to prevent them from catching fire.

It appears the fire started due to a leaking fuel pump in one of the vehicles in a bay at the shop. The fuel then apparently made contact with a hot surface, sparking the fire.

The Ministry of the Environment was called in, but no issues with air quality were reported. The fire department's HazMat team was also called in to monitor the situation.

Fortunately the owners of the shop managed to get out safely and there have been no reports of injuries. 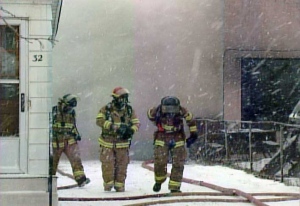