Greg Marshall is looking forward to not having to face a hostile crowd in Quebec City.

"Might be a little quieter on game day," says Western University's head coach from Laval University.

"We won't have to worry about our silent count, and dealing with crowd noise so that'll be good."

Western is practicing at Telus Stadium this week ahead of Saturday's Vanier Cup matchup with the Saskatchewan Huskies.

"We are going to practice outside to get used to the cold," says Marshall. "They have an indoor facility, we went there for part of practice yesterday, but the weather's not too bad. When I saw the schedule, if we were going to be in Quebec City in December I wasn't going to complain about the cold."

Western blew out St FX 61-6 in the Mitchell Bowl to reach the 56th edition of the Vanier Cup. The Mustangs will face the UTECK Bowl Champion Huskies in a game which can be heard on 1290 CJBK in London, Ont.

The Huskies have had a much tougher run to the national final, which included a last second 14-10 win over Montreal last weekend.

"What sort of gas is left in the tank for the Huskies?" says Jim Mullin, host of Krown Gridiron Nation on TSN.

"They had a very physical game against Montreal Western on the other hand didn't have to play their starters long against St FX. It's what's left in the tank versus rust? That's what I what I think we'll see on Saturday." 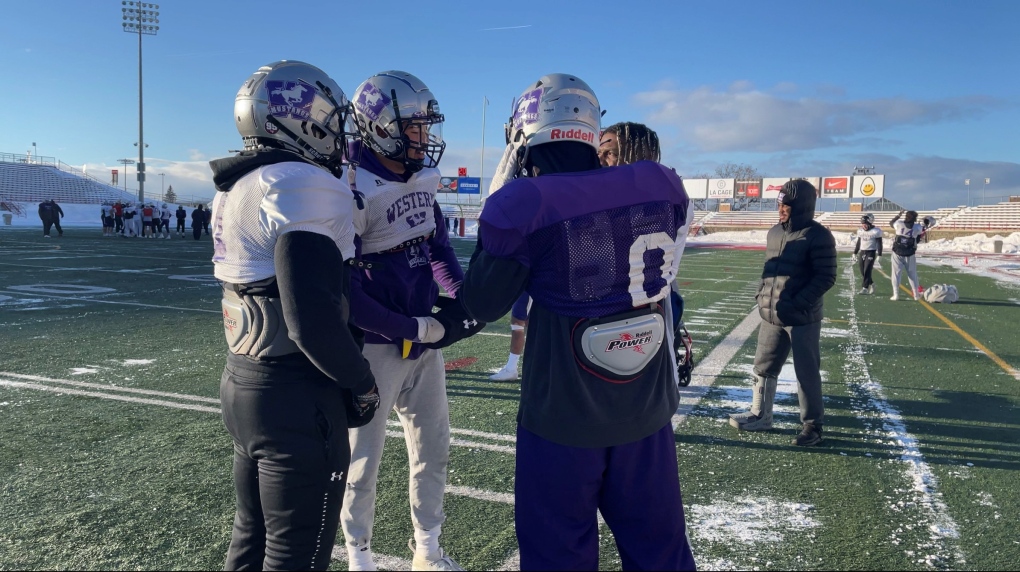 Players for Western practice outside to get used to the cold in Quebec City.

The Huskies were the top defence against the run in the West, while Western is known for its ability to run behind an offensive line full of all-stars.

These teams met in 2018 in the Mitchell Bowl when Western took a tie game at half-time and turned it into a 47-24 win.

"Looking back at the 2018 tape, some of the faces change but I think they are who they are and they would probably look at us to say the same thing," says Marshall.

"They play tough defense, they've got a strong defensive front and they got a big offensive line and and a solid running back no different than 2018 a very well coached team and they will be a great opponent for us on Saturday."

Mustangs receiver Brett Ellerman has been to three Vanier Cups over the past four seasons. He loves everything about Championship week.

"I'm trying to tell all the guys just to take it in," says Ellerman.

"This is a once in a lifetime type of deal here, so just you gotta have fun with it. December football, there's a lot of other teams that wish they were here where we are, so we got to we got to keep that in mind and just be thankful."

The Gridiron Nation panel had two people pick Western and one pick Saskatchewan to hoist the trophy Saturday afternoon.

Mullin believes the Mustangs depth, fresh and healthy legs and offensive talent will ultimately be the difference.

"This may play out close to what we saw in that National semifinal a few years ago between these two teams where it's just a matter of one team outlasting the other and then Western hitting the gas at the end of the day," says Mullin.

"On the show, I made a prediction 34-18 Western. I think Saskatchewan will stay close to three quarters, but Western will pull away because of that dominant offensive line, and that running game's ability to eat up the clock. I think Saskatchewan will probably try to press the ball as they're down late and probably give up the extra points there. So I think the Western Mustangs are going to be the Vanier Cup champions this year."

Western is trying for its 8th Vanier Cup in school history and first since 2017, while the Huskies have won three titles, the last one coming in 1998.