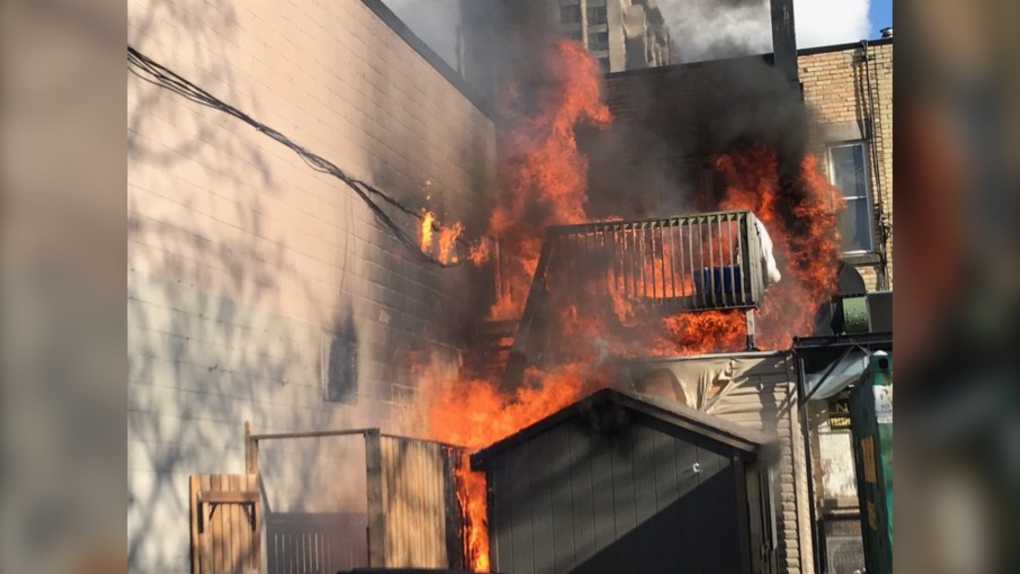 A fast moving fire spread to the exterior of a building located at Dundas and Lyle Streets in London, Ont. on May 17, 2022. (Source: London Fire Department/Twitter)

The London Fire Department responded to a blaze early Tuesday evening in the area of Dundas Street and Lyle Street.

According to a post shared on Twitter, the blaze — which affected the exterior of the Ark Aid Street Mission building — was fast moving and driven by wind.

"Ark Aid Street Mission has suffered a terrible incident of fire at our 696 Dundas St. primary building. The entire rear of the building including our storage shed, stairwell and areas leading into our kitchen and our sanctuary apartment have been effected,” Ark Aid wrote on Facebook.

Fire crews say that while the fire was mostly contained to the exterior of the building, some smoke did migrate to the interior.

Dundas Street at Lyle Street was closed earlier in the evening, but has since been reopened.

“We are incredibly thankful for the first responders — particularly the fire fighters that attended and resolved the fire efficiently and with no injuries or people effected,” Ark Aid wrote.

The cause of the fire is unknown, but the London Police Service has since been tasked with the investigation.

Fire crews on scene of a working fire at Dundas & Lyle, quick work by crews, fire knocked down, ventilation in progress #ldnont pic.twitter.com/KR99UhlmLK

The man charged Tuesday with seven counts of murder for opening fire at an Independence Day parade in suburban Chicago legally bought five weapons, including two high-powered rifles, despite authorities being called to his home twice in 2019 for threats of violence and suicide, police said.

A northern heatwave is melting records in Yukon and Northwest Territories, where temperatures climbed above 30 C in the Arctic Circle.

The Canadian Armed Forces (CAF) has released further details about what will and won’t be allowed under its revised dress code expected to be enforced starting this fall.