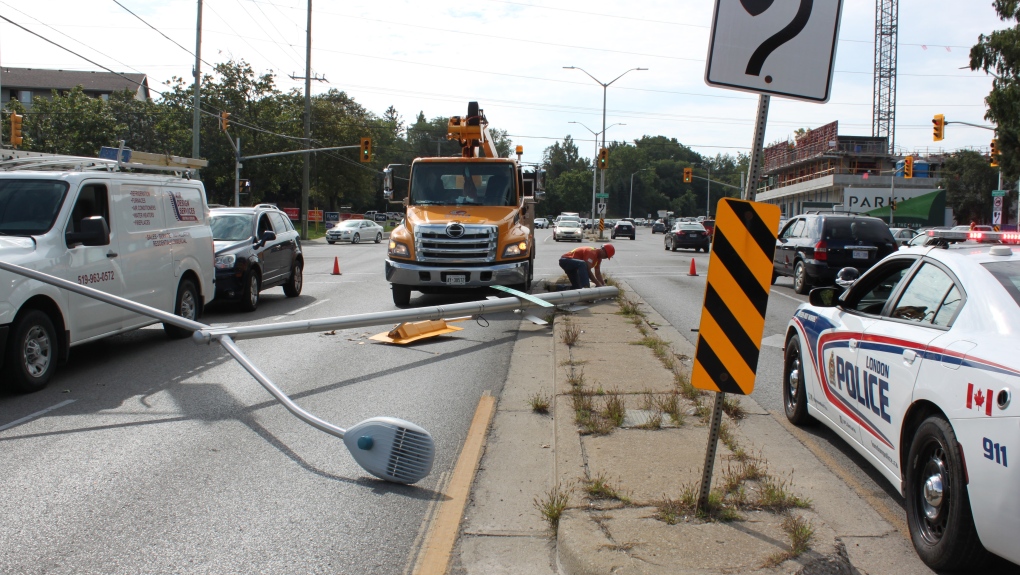 Police say a truck hit a light standard at the intersection of Wonderland Road and Springbank Drive.

The light standard was on the median separating the north and southbound lanes of Wonderland.

It toppled onto a service van and resulted in the closure of the northbound lanes of Wonderland while also slowing traffic in the southbound lanes.

No one was injured in the crash, which happened around 10:30 a.m.

The lane closures were needed to allow for repairs of the light standard.

Prime Minister Justin Trudeau is visiting Kamloops, B.C., today, where the Tk'emlups te Secwepemc Nation announced it had found what are believed to be some 200 unmarked graves at the site of a former residential school last spring.

Colin Powell, the barrier-breaking soldier and diplomat who served Democratic and Republican presidents in war and peace but whose sterling reputation was stained by his faulty claims to justify the U.S. war in Iraq, died Monday of COVID-19 complications. He was 84.

Half of Canadian parents would vaccinate their 5-11 year old ASAP: survey

With Health Canada expected to soon begin considering COVID-19 vaccine eligibility for children aged five to 11 years, a new survey by the Angus Reid Institute says that more than half of Canadian parents plan to give their kids the jab as soon as they get the green light.

For many Iraqis, the name Colin Powell conjures up one image: the man who as U.S. secretary of state went before the UN Security Council in 2003 to make the case for war against their country.

The family of an Ottawa man who has been missing since Thursday is offering a $10,000 reward for tips that lead to him being found.

The Toronto homicide detective who solved the killing of Stefanie Rengel says he was left stunned by what the young woman charged with her murder revealed during her police interview.

Do you plan on vaccinating your kids against COVID-19? We want to hear from you

As Health Canada prepares to review the Pfizer-BioNTech data on its COVID-19 vaccine for children under the age of 12, CTVNews.ca wants to hear from parents and caregivers about their plans