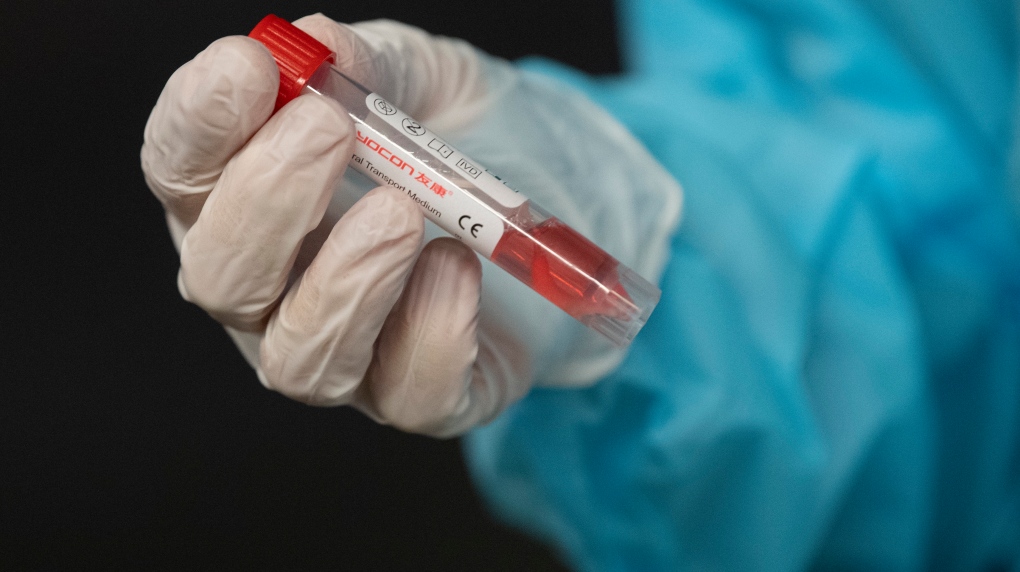 A nurse holds a vial containing a patients test swab during a demonstrates of the drive-thru Covid-19 testing centre at the National Arts Centre Wednesday November 18, 2020 in Ottawa. THE CANADIAN PRESS/Adrian Wyld
Middlesex Centre, Ont. -

The region has been in single digit cases for several days, but this is the lowest count in more than a month. Two cases were also reported in June 26.

The London Health Sciences Centre (LHSC) is caring for eight inpatients with COVID-19 with fewer than five in critical care.

The hospital is dealing with the only active outbreak in the region, in its B7-200 Adult Inpatient Mental Health/PICU unit. Fewer than five cases are currently associated with the outbreak.

For the week ending July 25, the London region saw a one per cent positivity rate, slightly above the provincial seven-day average of 0.9 per cent.

The region's positivity climbed slightly at the beginning of July, but has mostly been declining in subsequent weeks.

THOUSANDS OF DOSES TO EXPIRE

Meanwhile the health unit continues to encourage area residents to get vaccinated, saying it has over 21,300 doses of the Moderna vaccine that have been thawed and will expire on Aug. 12. This does not include doses already allocated for those with appointments.

More than 81,000 doses of Moderna have been administered in the region since July 1, but there has been a decline in the number of vaccinations over the last two weeks.

Medical Officer of Health Dr. Chris Mackie said in a statement, “We don’t want this vaccine to go to waste, so we are asking people who aren’t fully vaccinated to join us in the fight against COVID-19 and consider receiving a first or second dose of Moderna.”

NEW | First-time MPs get first taste of their new jobs