It’s an all-out effort to rescue one of southern Ontario’s most endangered species.

The eastern spiny soft shell turtle is at imminent risk of extinction, but staff from the St. Clair Region Conservation Authority (SCRCA) have been busy with a capture and release program along the Sydenham River, which runs through Lambton and part of Middlesex County.

“I think they're just considering their options trying to find the perfect spot, and they'll probably be back later in the day,” said Sarah Snetsinger, a watershed biologist with the SCRCA. She was sitting on a hill, observing female turtles along the riverbank.

“They're always looking for that really gravelly, sandy place to lay their eggs where it's not too steep. The spot here is pretty flat, kind of like a beach,” she said. 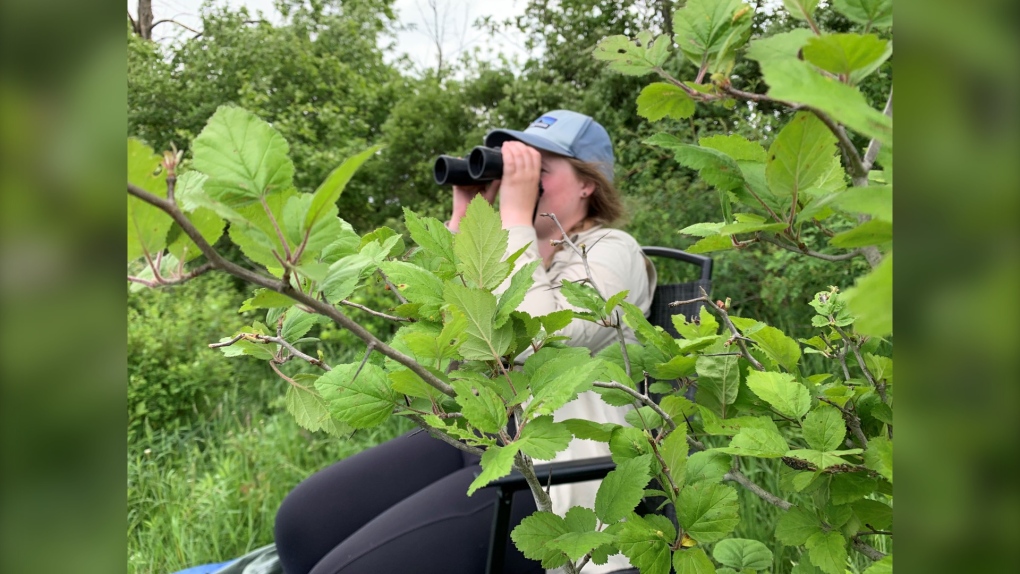 Sarah Snetsinger, a watershed biologist with the St. Clair Region Conservation Authority on June 1, 2022. (Bryan Bicknell/CTV News London)
Staff from the SCRCA have been busy keeping close watch on select locations along the river.

Director of Biology Erin Carrol said they’re waiting for the turtles to lay eggs, which they will collect, then take to a lab for incubation.

“When I release those hatchlings that I've collected I know that they had no chance of survival without intervention, like next to none,” Carrol explained. “In the wild they would have been predated by raccoons or other mammals, so for me it gives me a great deal of personal fulfillment to be able to give them a little bit of a helping chance.”

It's estimated that there are only about 1,000 adult members of the species left in all of Canada. The Sydenham River is one of only a few places in Ontario where eastern spiny softshell turtle is known to nest.

The ‘Captive Hatch and Release’ program is part of the SCRCA’s recovery efforts for the species.

“There's quite a few different threats that are affecting the species, from habitat degradation, so loss of that habitat that they need to survive, as well as poaching,” said Kelli Smith, a watershed biologist with the SCRCA.

Smith said the rare turtles have been illegally collected for the pet trade, or even eaten as a delicacy — which is why they’ve asked CTV News not to disclose the location of this nesting site.

The turtles will lay eggs throughout the month of June. Incubation in the lab lasts about 60 days, before they’re sent back into the wild to fend for themselves.

Actor Anne Heche has died after suffering a brain injury following a car crash last week, according to her family. She was 53.

Salman Rushdie, the author whose writing led to death threats from Iran in the 1980s, was attacked and apparently stabbed in the neck Friday by a man who rushed the stage as he was about to give a lecture in western New York.

How warm is the planet? Data shows last month was 6th hottest July on record in 143 years

Last month was the Earth’s sixth-warmest July on record in 143 years, according to the U.S. federal agency that studies oceans, the atmosphere, and coastal areas.

300,000 Canadians at 'severe' or 'moderate' risk of gambling problems

While problem gambling affects a minority of the Canadian population, more than 300,000 are at “severe” or “moderate risk” for gambling-related problems, according to a Statistics Canada study of gambling behaviour.

A group challenging Quebec's new language law logged a first legal victory against the legislation on Friday, as a judge temporarily suspended a provision requiring English court documents to be translated into French.

Iqaluit declares state of emergency due to water shortage

The City of Iqaluit has declared a state of emergency due to a water shortage.

The City of Toronto is investigating a power outage that left a large swath of the downtown core including office buildings, a major mall and a university campus without electricity yesterday.