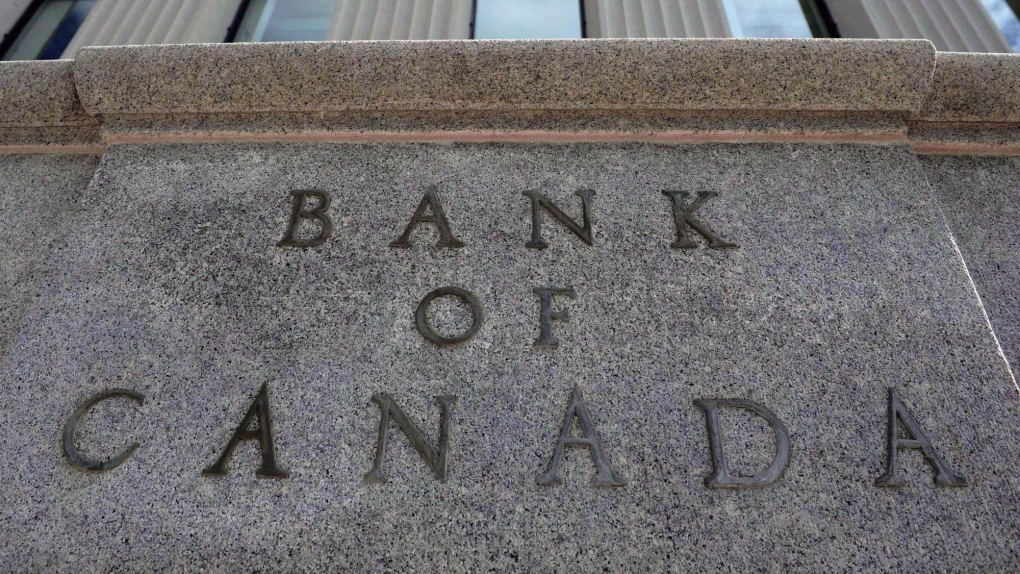 The Bank of Canada building is pictured in Ottawa on September 6, 2011. (THE CANADIAN PRESS/Sean Kilpatrick)

OTTAWA -- The Bank of Canada is maintaining its trend-setting interest rate as its careful assessment of the timing of future hikes continues amid a backdrop of moderating growth.

The central bank, which kept its rate at 1.25 per cent Wednesday, said slower first-quarter growth of about 1.3 per cent was largely a result of housing markets' responses to stricter mortgage rules and sluggish exports. The bank had predicted the economy to expand by 2.5 per cent in the first three months of the year.

It's expecting the economy to rebound in the second quarter with 2.5 per cent growth, in part because of rising foreign demand, to help Canada expand by two per cent for all of 2018. The economy saw three per cent growth in 2017.

"Canada's economic growth has moderated, and the economy is operating close to capacity," the bank said in its latest monetary policy report, which was released alongside the rate announcement.

"While a moderation was anticipated, temporary factors ... are resulting in sizable short-term fluctuations in growth."

The bank reiterated it expects further interest-rate hikes to be necessary over time and that it will follow a cautious, data-dependent approach when weighing future decisions.

"Some progress has been made on the key issues being watched closely by governing council, particularly the dynamics of inflation and wage growth," the bank's statement said.

"This progress reinforces governing council's view that higher interest rates will be warranted over time, although some monetary policy accommodation will still be needed to keep inflation on target."

The bank will also continue to watch the economy's sensitivity to higher interest rates and how well it builds capacity through investment, which would enable Canada to lift growth beyond what is viewed as its potential ceiling without driving up inflation.

Signs suggest the economy has made some progress in building this capacity, the bank said.

The bank is also keeping a close watch on the evolution of external risks.

Exports and business investment in Canada have been held back by competitiveness challenges and trade-policy uncertainties, which include escalating geopolitical conflicts that risk damaging global expansion, the bank said.

It laid out estimates on the growth impacts on Canada due to tax reforms in the United States, which are expected to lure more investment south of the border. Due to these investment challenges, it predicts Canada's gross domestic product to be 0.2 per cent lower by the end of 2020.

Exports are also expected to take a hit from reduced investment and trade uncertainties. The bank projects that Canada's GDP will be 0.3 per cent lower by the end of 2020 due to the negative impacts on exports.

Fiscal stimulus introduced in recent provincial budgets is expected to help offset these effects by adding about 0.4 per cent to Canada's real GDP by the end of 2020.

Governor Stephen Poloz introduced three rate hikes since last summer in response to an impressive economic run for Canada that began in late 2016. But due, in part, to factors such as mounting trade unknowns, Poloz has not raised the rate since January.

The bank offered an analysis Wednesday of some of the key indicators it's watching ahead of rate decisions.

On inflation, the bank said temporary downward forces weighing on the rate have largely dissipated. Other transitory factors, including higher gasoline prices and recent minimum wage increases are now expected to raise inflation above the bank's January predictions.

Canada's annual pace of inflation in February sped up to 2.2 per cent -- its fastest pace in more than three years -- to creep above the central bank's ideal target of two per cent. Meanwhile, the average of the agency's three measures of core inflation, designed to omit the noise of more-volatile items like gasoline, climbed slightly above two per cent for the first time since February 2012.

For wage growth, the bank said despite recent improvements it remains below what would be expected if the economy no longer had slack in its labour force.

For 2018, it's now predicting two per cent growth, as measured by real gross domestic product, compared to its 2.2 per cent prediction in January.

It noted that these readings would still be slightly above Canada's estimated potential output for the next three years.