LONDON, ONT. -- It is a battle over the future vision of Port Stanley, Ont.

"This is the 3rd time that council has tried to push through a Heritage Conservation District (HCD)," says Elizabeth Hudson, a resident of the small village on Lake Erie.

In what is typically a quiet village in the winter months, there is a loud uprising from many residents over a proposed HCD.

"They want to do be able to control the development of the town. Everyone loves Port Stanley but there is a small group that wants to keep the clock absolutely still."

Among the 'group' she is referring to is the Port Stanley Village Association (PSVA).

They have asked Central Elgin council to reconsider a proposal for a HCD which was originally brought forward and rejected in 2013.

The PSVA has since updated that plan and revised it by changing regulations so they are much less stringent.

Residents are questioning whether this has resurfaced after the PSVA was unable to stop the major Prespa Homes development on William St. from going ahead.

"It would not have stopped Prespa but it would have given the municipality more guidelines in its presentation," says Dan Ross, president of the PSVA.

"This is not designed to stop growth, it's to respect the heritage we have and make sure what we do, be it growth or renovation is consistent with that heritage. By defining the district people know in advance they are in a HCD and they can deal with planning staff to understand the guidelines in place. If appropriate they can work with the community to make sure something comes forward that really is consistent with heritage of village."

Central Elgin Mayor Sally Martyn is a member of the municipal HCD committee. It consists of parties from the BIA, PSVA, Heritage Port, and three members of council.

"Port is growing leaps and bounds and we aren't restricting the sub-divisions in any way.

I believe in keeping that look and feel of Port Stanley. I feel that people want to come to Port, and live in Port because it's a quaint village."

Before council can consider a by-law to designate a HCD, a statutory public meeting must be held. That will take place virtually via Zoom webinar next Wednesday Jan. 20.

"Most people didn't receive this information about the meeting," says Ann Stevens, owner of Little Beach shop on Main St.

"It came unmarked and most thought it was junk mail so only a handful of people knew this was going on. Thank goodness that people were made aware, and news spread fast on social media." 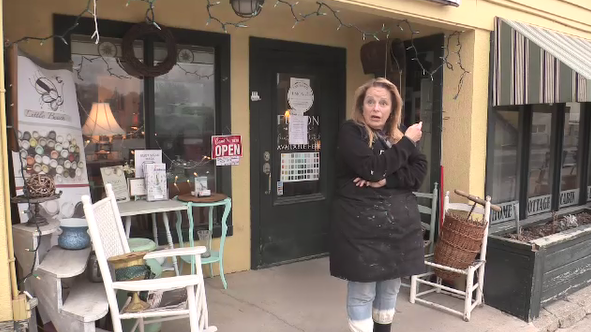 Stevens feels a HCD will impose huge restrictions on buildings by requiring the approval of a heritage permit to make any major changes to properties. Minor changes will be exempt from any approval.

"This isn't anything about maintaining charm," says Stevens.

"In my opinion it's about maintaining our rights as building owners as residents. I'm afraid without public participating in a building with as many residents you can get in there, it's going to get slipped through."

Hudson feels the same way after just learning about the meeting this week.

"They did this right in the winter, when a lot of these people that are cottagers," says Hudson, whose husband wrote a strong letter to Central Elgin opposing the HCD.

"The majority of people don't even know what's going on. The notice told us, if you disagree and you don't lodge a complaint, you have no recourse in the future. However when we went to do it, the email addresses didn't even work. The person who wrote that letter, we couldn't get a hold of him."

The letter was written by Donald Leitch, the former CAO of Central Elgin. He retired last month. Paul Shipway is the new CAO.

Passing this proposal will take four of seven council votes.

"We will have to see what happens with public consult," says Martyn.

"Guarantee you have three already on the committee who feel quite strongly about it. We'll have to see what the public has to say. We've tried to make it more amenable to it, and the complaints they had before we tried to alleviate."

The study and previous documents related to the proposal can be found here.