Some Londoners who showed up to the site of a fatal crash site on the west side of the city say they “can’t imagine the grief the families must be going through.”

“It was instantly emotional. We were messaging each other immediately in tears, trying to update each other with the info we were finding,” said Amanda Charron. “For hours last night just keeping up to date on everything we could, and crying, and just everything.”

London, Ont. police reported Wednesday morning that an eight-year-old girl died following the crash on Tuesday night that also injured nine other people, ranging in age from six to 40.

So far no one has been arrested and no charges have been laid, but police said a 76-year-old female driver was involved and remained at the scene. She was not taken to hospital.

Police say the driver was westbound on Riverside Drive at Wonderland Road when she struck another vehicle stopped at the red light, and may have struck a second vehicle, before continuing through the intersection and hitting a light standard, tree and then pedestrians.

The group had been walking eastbound on the north side of Riverside, just west of Wonderland, when they were struck by the vehicle after it mounted the curb, police said.

Girl Guides of Canada have confirmed a number of their members were involved in the collision.

In a statement they said, "Girl Guides of Canada is in contact with local volunteers to provide any support we can and we will help London Police Service in any way possible in their investigation." 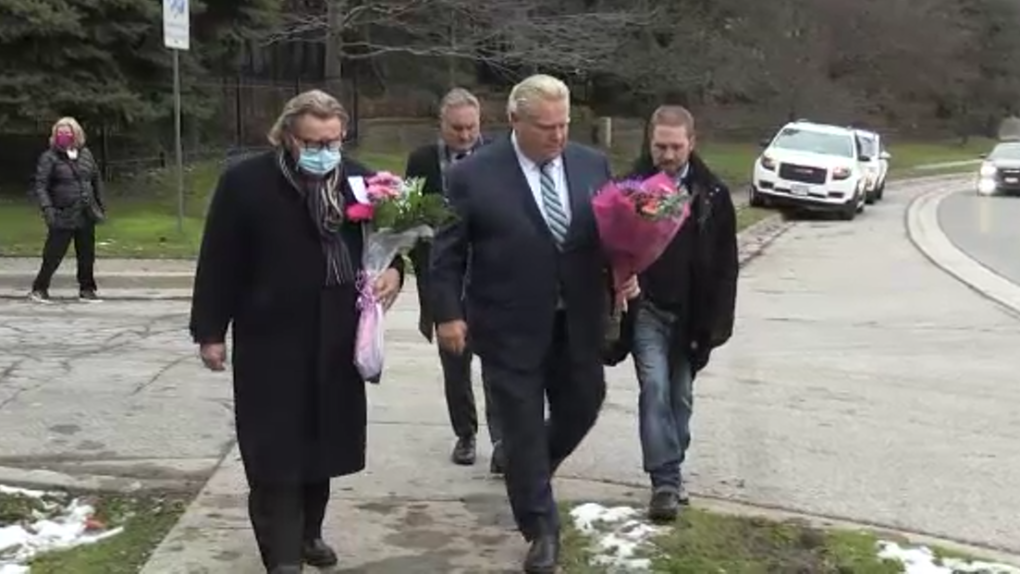 London Mayor Ed Holder, left, and Ontario Premier Doug Ford carry flowers to the scene of a fatal crash in London, Ont. on Wednesday, Dec. 2, 2021. The Thames Valley District School Board has confirmed four of its students were involved, including the young girl who died, and say trauma teams have been sent to the affected schools.

“On behalf of Thames Valley, I want to express my heartfelt condolences to the families, friends and community members who have been affected by this sad event,” said Director of Education Mark Fisher in a statement. “We are also grateful for the actions of our first responders and hospital staff.”

The London District Catholic School Board said a member of their community was also impacted and added, "We are deeply saddened to hear about the tragic accident."

Police say the investigation into the collision is ongoing.

Ontario Premier Doug Ford and London Mayor Ed Holder left flowers at the scene and took a moment to reflect on Wednesday afternoon.

Ford said, "This is such a tragedy, I want to give my condolences, my prayers and thoughts to the little girl's family. And everyone else I want to wish them a speedy recovery…my heart just breaks for the family."

Holder thanked Ford for his support and also added his hopes and prayers for a speedy recovery for those injured.

"This is when we need our fellow Londoners to rally, to come together and support each other," he said.

Prime Minister Justin Trudeau also weighed in on the incident, tweeting that the news was heartbreaking and sending best wishes to those injured.

The news from London, Ontario breaks my heart. To the family and friends of the child who passed away, know that Canadians across the country are here for you. And to those who were injured, we’re wishing you all a fast and full recovery. We’ll be keeping you in our thoughts.

Neighbours and witnesses who live nearby the scene of the incident described the "heartbreaking" string of events Wednesday.

“My heart goes out to the families... it’s just so much tragedy this time of the year. My heart just broke, I can’t imagine any family going through that, you know, their children getting hurt,” Pat McMillan told CTV London's Sean Irvine.

“I actually thought it was going to be sick to my stomach. It was so terrible, what had happened,” said another nearby resident, Heather Goddard. “And of course the fact that I'm at that corner every morning crossing, people don't look... there were children involved which is heartbreaking.”

" I have to say the response from emergency crews was astounding. I mean, there were so many people here and from fire and paramedics and police... as you approach the holidays, it's just, your heart goes out for little ones who have seen something traumatic and for other ones that hopefully, you know, our medical teams can bring them around out of this,” said Beamish.

After a traumatic incident such as this, care must also turn to the first responders who were on scene working to save lives.

Paramedic Deputy Chief Adam Bennett says his crews that responded to the scene on Riverside Drive are doing well, but will still engage with a peer support team that works under the training of a clinical psychologist.

“After a large or traumatic event such as that, we want to make sure we debrief with paramedics after the call,” said Bennett.

London police will turn to the “member care and wellness branch,” which includes peer support and an on-site psychologist.

"This is definitely a tragic and very, very sad incident, and our condolences and our thoughts go out to everybody involved,” said London police Const. Sandasha Bough. “The family members, the friends, all of the first responders who were on scene last night, and everybody who was affected by this tragic incident.”

Tom Massel worked along side London police and the fire department for 25 years, helping develop a program for dealing with crisis incidents.

“After the incident is over, that’s when people run into difficulties,” said Massel.