The city of Sarnia, Ont. may become one of the first in the province to reduce speed limits on all non-arterial roads to 40 kilometres per hour.

Councillors have instructed staff to consult with the public on the idea.

The move comes as Sarnia looks to respond to provincial safety targets and concerns from residents.

She says it was in response to her frustration with speeding drivers. 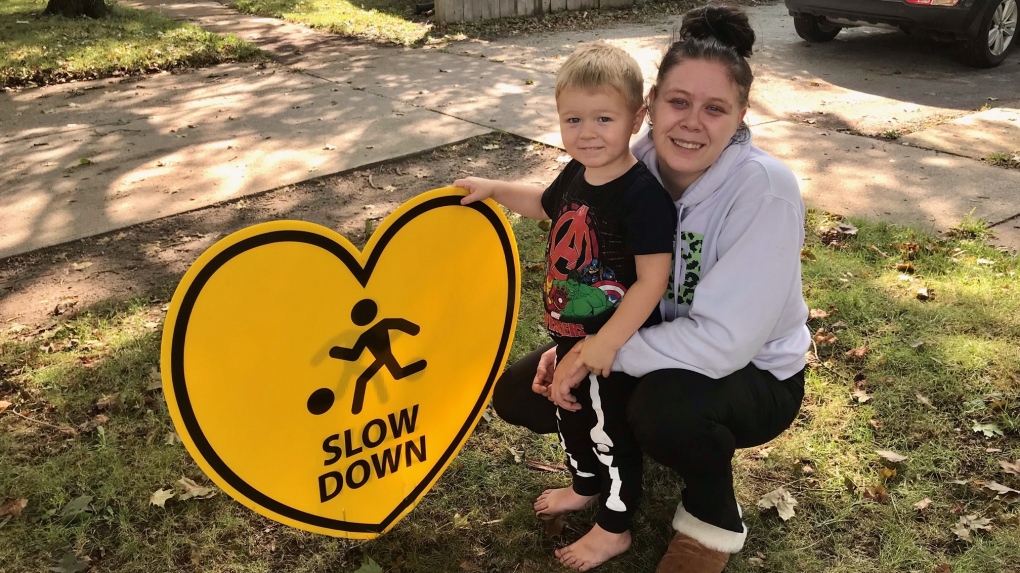 McKayla Meredith and her son Kayden, in front of their lawn sign designed to slow drivers on their residential street in Sanria, Ont., Sept. 14, 2021. (Sean Irvine / CTV London)

“If you can hear a car’s motor running and revving up, you can see at least 70 kilometres they’re going in a 50 zone.”

But since the sign went up three months ago, things have changed.

“It does work for the most part, as soon as they see the sign, they tend to slow down,” Meredith adds.

But not everybody does, and that reality is partly what sparked Sarnia Council into action.

Although not all civic leaders support it, Councillor Brian White says it’s time to talk about rolling back the speed limit to 40.

“What if we did it across the entire city? So, all of the streets are sort of nestled in between all the arterial roads. What if we just slowed those down a little bit?” he questions. But, would slowing down traffic work? If school zones are an example, a city report says not always.

But at the other on Russell Street, in front of P.E. McGibbon Public School, speeds fell by just one kilometre per hour.

Mark Cassidy lives right in front of the posted 40 kilometre limit on Russell.

“People don’t seem to see the sign", he tells CTV News, adding It’s had “no effect” on speeds.

While a city-wide speed limit reduction on some streets is preferred, city staff is also looking at enforcement.

Automated speed enforcement cameras are being investigated but remain cost-prohibitive.

The situation takes Meredith back to the slow-down sign on her lawn. She says it has been a great first step in a speeding reduction effort, which she argues must continue.

“With everything else going on in the world right now, I don’t need to worry about people just not paying attention for kids on their way to school.

Saskatchewan Premier Scott Moe has announced a temporary indoor masking mandate that will come into force on Friday followed by a proof-of-vaccination policy.