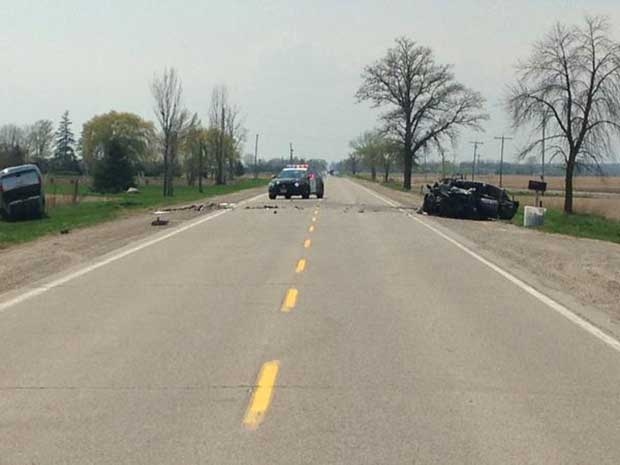 Two people were taken to hospital after a head-on crash on Egremont Drive north of Strathroy, Ont. on Friday, May 8, 2015. (Daryl Newcombe / CTV London)

Two people were injured after a head-on crash on Egremont Drive near School Road, north of Strathroy.

Emergency crews were called to the two-vehicle crash that left both drivers with life-threatening injuries on Friday afternoon.

One person was airlifted to hospital while the other was transported via land ambulance.

There are reports the the driver of each of the two vehicles was breathing and conscious when emergency responders arrived.

The force of the impact sent the vehicles into opposite ditches, with a minivan flipped onto its roof.

The cause of the crash remains under investigation, but early indications are that one vehicle crossed the centre line.

Egremont Drive was expected to remain closed between School Road and Centre Road for several hours.