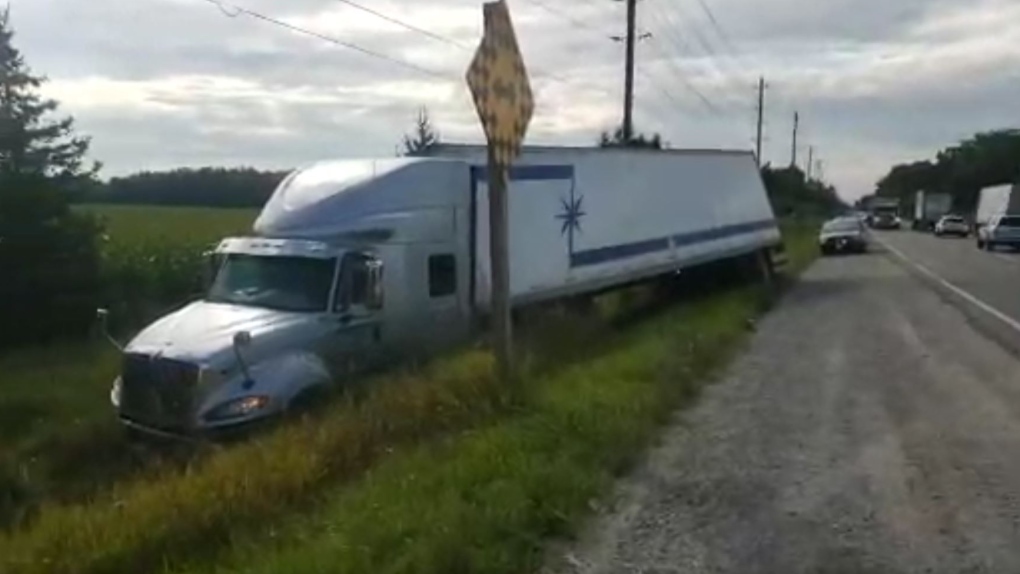 A transport truck in the ditch is seen after avoiding a potential three-vehicle crash near Simcoe, Ont. on Monday, Sept. 9, 2019. (@OPP_WR / Twitter)

Norfolk County OPP are crediting two transport truck drivers for helping to avoid a head-on collision that could have been fatal.

The incident happened on Highway 24 at Windham Road 12 near Simcoe, Ont. around 9:50 a.m. on Monday.

According to police, one transport was northbound and another southbound, when a northbound pickup suddenly turned left, forcing the southbound transport driver to take evasive action.

That transport sideswiped a northbound transport, forcing it into the ditch.

OPP Const. Ed Sanchuk says, "Two transport truck drivers...did an amazing job of avoiding a head-on collision and they can be credited with potentially saving lives this morning."

Dash camera video from the southbound transport shows the pickup and both transport drivers attempting to avoid a collision.

Police say charges are pending against the pickup driver who left the scene but was later located by officers.

Highway 24 was closed from Old Highway 24 to Concession 13 Townsend for several hours so the truck could be removed from the ditch.

WATCH- how two transport truck drivers saved a life today @NorfolkCountyCA. It happens fast and that decision YOU make as a driver has endless effects on everyone involved. Please #Slowdown and #DriveSafe. #NorfolkOPP ^es pic.twitter.com/JdNfvzWdPK