TORONTO -- Gord Downie, the poetic lead singer of the Tragically Hip whose determined fight with brain cancer inspired a nation, has died. He was 53.

Downie died Tuesday night "with his beloved children and family close by," the band said in a statement on its website Wednesday morning.

In the wake of his diagnosis with glioblastoma -- an incurable form of cancer -- the musician became a symbol of perseverance in the face of his mortality.

"Gord knew this day was coming -- his response was to spend this precious time as he always had -- making music, making memories and expressing deep gratitude to his family and friends for a life well lived, often sealing it with a kiss GǪ on the lips," the statement said.

Downie spent the last chapter of his life raising funds for brain cancer research and advocating for the rights of Canada's Indigenous Peoples.

"Gord said he had lived many lives," said the statement, which was attributed to the Downie family. "As a musician, he lived 'the life' for over 30 years, lucky to do most of it with his high school buddies. At home, he worked just as tirelessly at being a good father, son, brother, husband and friend. No one worked harder on every part of their life than Gord. No one."

Downie, one of Canada's most revered singer-songwriters, penned a steady stream of 1990s rock radio staples including "New Orleans Is Sinking," "Blow at High Dough," "Courage (For Hugh MacLennan)," "Ahead By a Century" and "Bobcaygeon." While Hip albums released in the 2000s didn't produce nearly as many hits, the band hung on to its unofficial status as Canada's favourite rock band.

While the Hip was frequently described as quintessentially Canadian, Downie had dismissed the suggestion that he set out to celebrate his homeland in song.

"I haven't written too many political lyrics," he said in an interview with The Canadian Press in 2014. "Nor have I written any pro-Canada lyrics, any kind of jingoistic, nationalistic cant.... That stuff doesn't interest me and I don't even know if I could write that if I tried because I don't really feel it.

"Social causes are quite obvious. Music brings people together. So my function in anything I do is to help bring people closer in."

The last chapter of his career found Downie using his time in the spotlight to focus more attention on the issues facing Indigenous communities in Canada.

In the aftermath of the shocking May 2016 announcement that Downie had been diagnosed with terminal brain cancer the band said it would mount a tour -- which many assumed would be the Hip's last.

Interest was off the charts and tickets sold out nearly immediately. Despite conflicting with its coverage of the Summer Games in Rio, the CBC broadcast the last show of the tour live, in the Hip's hometown of Kingston, Ont., and thousands of fans also attended public viewing parties across the country to experience the band's swan song.

An impassioned Downie led the group through a nearly three-hour set and acknowledged the country's enthusiastic support.

He used the national platform to call for more attention to the inequities faced by Indigenous Peoples, particularly in the North.

"He cares about the people way up North, that we were trained our entire lives to ignore, trained our entire lives to hear not a word of what's going on up there. And what's going on up there ain't good. It's maybe worse than it's ever been, so it's not on the improve. (But) we're going to get it fixed and we got the guy to do it, to start, to help."

About two months later, Downie released the multimedia solo project "Secret Path," which recounted the life of 12-year-old Chanie Wenjack, who died in 1966 after running away from a residential school in northern Ontario.

"Secret Path" won three Juno Awards in April -- best adult alternative album, songwriter of the year for Downie, and best recording package of the year for its presentation with a graphic novel. While Downie didn't attend the Juno festivities, he appeared in a pre-recorded acceptance speech during the telecast.

"First Nations have many, many stories like this one," he said in reference to Wenjack's experience being separated from his family and put in a residential school.

"My dream would be that this record with Jeff Lemire's drawings might help people. Might give teachers something to help teach our young ones."

In June, Downie was inducted as a member of the Order of Canada for his work in raising awareness of Indigenous issues. He was also set to be honoured by the Order of Canada along with his bandmates for "their contribution to Canadian music and for their support of various social and environmental causes."

The Tragically Hip's last release, "Man Machine Poem," won the Juno for rock album of the year and the band also took home the group of the year prize, which was its third time winning the award among 11 nominations.

The Hip's modest beginnings can be traced back to 1984 in Kingston, where Downie co-founded the band with four high-school friends -- including guitarist Rob Baker, bassist Gord Sinclair and drummer Johnny Fay. Guitarist Paul Langlois joined in 1986 when saxophonist David Manning left the band.

The early years were a slog as the Hip graduated from local university campus shows to dive bars like the Toucan, where they played on a stage tucked in the back corner of the venue's basement.

A small but loyal fan base began to form just as their self-titled debut EP hit record stores in 1987. While not one of the Hip's most-loved releases -- and one the band didn't touch during their career-spanning final tour -- it offered a sliver of insight into Downie's songwriting and performance potential.

Downie's reputation for adding monologues to songs during live performances was started with a memorable performance of "Highway Girl," which fans nicknamed the "double suicide rant" version. Part of the mid-song rant would later make up the lyrics of the song "Locked in the Trunk of a Car."

But it was the live "killer whale tank" version of the fan favourite "New Orleans Is Sinking," off the band's 1989 followup "Up to Here," that cemented Downie's legacy as a unique live performer always capable of surprising an audience.

The legend of the band's thrilling concerts grew as rock radio stations devoured the Hip's output of one hit album after another. "Road Apples" in 1991 produced favourites like "Little Bones," "Long Time Running" and "Three Pistols," and the next year the record "Fully Completely" introduced another slew of soon-to-be classics including "At the Hundredth Meridian," "Fifty Mission Cap" and "Wheat Kings."

Stories of the Hip's unusual ability to attract huge crowds wherever they played in Canada gradually began to trickle south of the border and the band got its biggest chance to break through in the United States in 1995, thanks to a fellow Kingston native. Dan Aykroyd introduced the Tragically Hip as musical guests on "Saturday Night Live" to play two songs off "Day for Night," which was released six months earlier.

The band won over pockets of fans in the U.S., Europe and elsewhere but never got as big internationally as they were back home, where they collected 16 Junos, a star on the Canadian Walk of Fame, and immortalization on a postage stamp in 2013.

While playing sold-out shows to adoring audiences, Downie also sought out opportunities to stretch himself creatively outside the confines of the Hip.

He dabbled in acting with roles as a police officer in "Trailer Park Boys: The Movie" and as a recovering cancer patient in the drama "One Week." Prior to "Secret Path" he had cultivated several other solo projects, starting with the album "Coke Machine Glow" in 2001, released with a companion book of poetry; "Battle of the Nudes" in 2003; and "The Grand Bounce," credited to Gord Downie and the Country of Miracles, in 2010.

In 2014, Downie recalled the thrill of performing for a different kind of audience -- at a country music festival -- in support of a side project with the Sadies.

"In this country, perhaps with a certain identity trailing you around, it's hard to be miscast," Downie told The Canadian Press.

Staunchly dedicated to his environmental side projects, Downie was a devoted board member of the Lake Ontario Waterkeeper advocacy group, helping to raise money for the cause through benefits.

After his diagnosis, he lent his name to brain cancer research with the Gord Downie fund at Sunnybrook Hospital in Toronto.

Downie's final public performance was in February as a surprise guest during a Blue Rodeo concert at Toronto's Massey Hall. Singer Jim Cuddy introduced Downie before he joined the band in a rendition of their 1992 hit "Lost Together," alongside members of the Sadies. As the song finished Downie kissed and hugged his fellow musicians, waved to the audience and left the stage.

"Introduce Yerself" is slated for release Oct. 27 with each song written about a specific person. 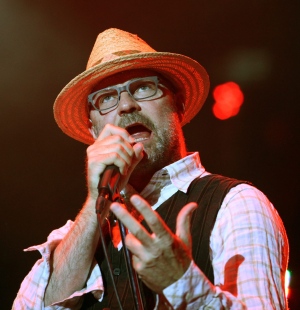