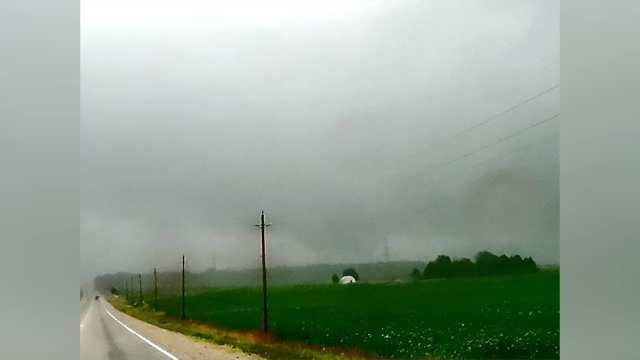 It didn’t leave behind a lot of damage, but researchers with the Northern Tornadoes Project have confirmed an EF-0 tornado touched down near Bayfield on Saturday night.

Around the same time, 8:30 p.m., a tornado touched down in the Thornbury/Clarksburg area in Grey County. Minimal damage was associated with that tornado, as well.

Western University researchers say video footage from the scene of the Bayfield twister, plus a ground search, confirmed that a weak tornado touched down between Bayfield and Clinton. They estimate winds near 90 km/h.

It’s been an active tornado season across Ontario, with more than 10 twisters so far this summer.

The worst so far was in Barrie earlier this month.

An NTP survey team assessed 3 events related to storms on the evening of July 24 in southern ON. Results: there were weak EF0 tornadoes in the Bayfield area and in Thornbury, as well as a weak EF0 downburst in Clarksburg. Still assessing July 24 events in Essex County. #ONStorm pic.twitter.com/7poWXTKLUi

Taliban hang body in public; signal return to past tactics

The Taliban hanged a dead body from a crane parked in a city square in Afghanistan on Saturday in a gruesome display that signaled the hard-line group's return to some of its brutal tactics of the past.