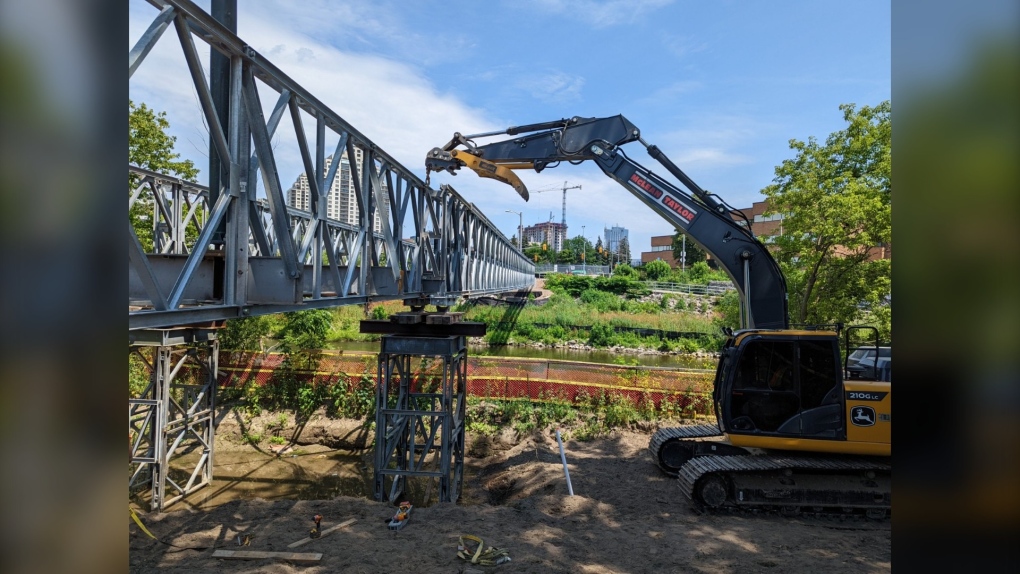 Work is resuming on the Victoria Bridge replacement on Ridout Street, as the city now has one of the two federal permits allowing them to install a pedestrian/cyclist temporary bridge. (Reta Ismail/CTV News London)

Work is finally resuming on the Victoria Bridge replacement on Ridout Street.

The City of London now has one of the two federal permits allowing them to install a temporary bridge for pedestrians and cyclists.

The temporary pedestrian bridge will open in a couple of weeks.

A permit for the main bridge is expected soon.

CTV News London reported last month that construction for the new Victoria Bridge was halted due to lacking a permit from the Department of Fisheries and Oceans and Transport Canada that would allow them to remove the existing bridge and install the new one.

Doug MacRae, London's transportation and mobility director is confident the project is heading in the right direction.

"Approvals were received for the launching of this temporary bridge, and at the same time in parallel we're finalizing the approvals for the replacement of the main bridge," he told CTV News London. "We're confident those will fall into place for the crews to finish their work here and then transition over to the main bridge."

The new bridge will be a link connecting Old South and downtown London and will be used by thousands of Londoners.

The 96-year-old bridge Victoria Bridge replacement has an approved budget of $22 million and the new bridge is slated to open late summer 2023.