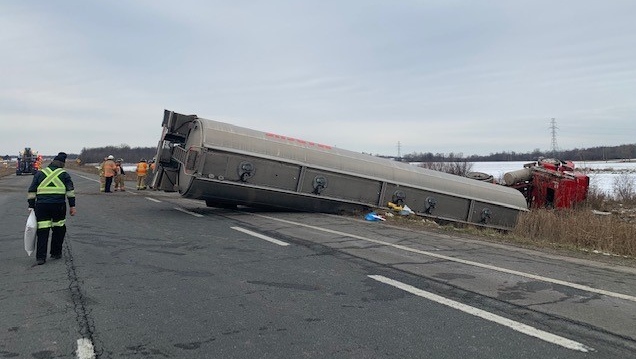 Emergency crews work at the scene of a tanker rollover and fuel spill on Highway 402 in London, Ont. on Wednesday, Dec. 1, 2021. (Jennifer Basa / CTV News)

A large gas spill that resulted from a tanker rollover on Highway 402 just west of Colonel Talbot Road, kept the highway closed for quite awhile.

The rollover shut down all westbound lanes and one eastbound lane of the highway from Wednesday afternoon and into Thursday morning.

The roadway finally reopened around 7 a.m.

UPDATE - GOOD NEWS. #Hwy402 westbound lanes are OPEN! The #OPP would like to thank the motoring public for their patience. A BIG #thankyou to all Emergency Services and #tow truck operators for all their assistance. ^es pic.twitter.com/ACzXzVf4tv

Drivers had been asked to avoid the area and OPP said the closure could last 15 to 18 hours for the investigation and cleanup.

The London Fire Department tweeted that they were working with police, paramedics and the Ministry of Transportation as they deal with the hazmat incident.

Fire officials have confirmed fuel has leaked from the tanker, but say the leaks have been plugged and crews are working to contain the spill.

The driver was transported to hospital with unknown injuries.

Incident update: An unknown amount of fuel leaked from the tanker. Fire crews have plugged the leaks. Ross Towing spills team are on scene to assist. Working with @ONtransport @ONenvironment @OPP_WR #ldnont pic.twitter.com/ykE50u1dGm

#MiddlesexOPP on scene of transport truck rollover on #Hwy402 WB @MiddlesexCentre . Hwy402 is CLOSED at Col. Talbot Road. All westbound traffic is being re-routed. Please avoid the area if possible. #Patience U/k how long it will be closed for. ^jh pic.twitter.com/8EJAo7UYr0