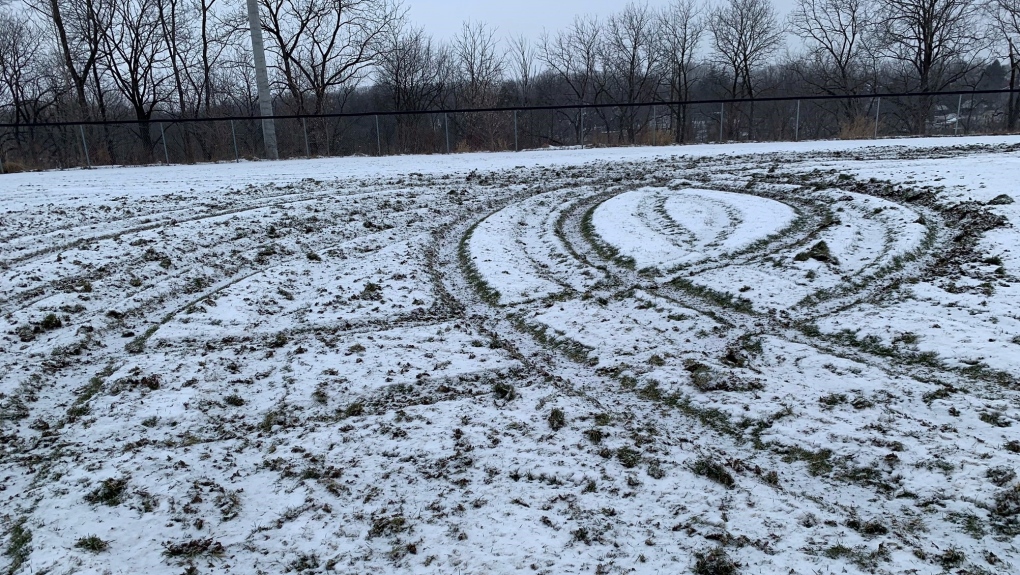 Damage to King Field, one of four premier diamonds at the Canadian Baseball Hall of Fame and Museum (CBHOF) in St. Marys, Ont. is seen on Monday, Jan. 10, 2022. (Source: Scott Crawford / CBHOF)

A group of youths has taken responsibility for damage to a field at the Canadian Baseball Hall of Fame in St. Marys, Ont., according to the Stratford Police Service.

In early January, King Field, one of four premier diamonds at the attraction in St. Marys, Ont., suffered significant damage as a result of a vehicle repeatedly doing donuts in the outfield.

The incident was believed to have occured overnight between Jan. 7 and 8.

Police say in the days after information about the incident was released to the public, a group of youths ranging in age from 14 to 16 years old stepped forward to take responsibility for the damage.

St. Marys Mayor Al Strathdee had also put out a call for those involved to take responsibility.

On Jan. 20, a Stratford officer involved in the investigation facilitated a 'Restorative Justice Conference' involving the youths, their families and representatives of the Hall of Fame.

As a result of the conference, officials say a resolution was reached.

In a statement police said it is a solution, "which held the youth accountable for their actions, assists with reparations to the damages caused at the Canadian Baseball Hall of Fame, and helps the youth involved to learn from their actions."

Officials with the Baseball Hall of Fame have said it could cost several thousand dollars to repair the vandalism, and the damage could mean the field isn't available for use this summer.

That was a disappointment to the Hall of Fame as the field is used primarily for young players starting out in baseball.

Thunderstorms kill 2 in southern Ont., knock out power in parts of Que.

As the May long weekend kicked off, a massive thunderstorm in southern Ontario and Quebec brought strong wind gusts that knocked down trees, took out power and left at least two people dead.