Police in London, Ont. have charged a suspect with four counts of first-degree murder and one count of attempted murder after he allegedly hit five pedestrians because of their Islamic faith, killing four members of the same family.

Deceased are a grandmother, a husband and wife and their teenage daughter. A nine-year-old boy is recovering in hospital from serious but non-life-threatening injuries.

A family spokesperson has identified the victims as the Salman Afzaal, 46, his 44-year-old wife Madiha, their 15-year-old daughter Yumna, and Salman's 74-year-old mother. The young boy who survived is Fayez.

The crash occurred around 8:40 p.m. Sunday, when the driver of a pickup truck, Nathaniel Veltman, 20, of London, allegedly struck five people walking on Hyde Park Road near South Carriage Road.

Veltman was arrested roughly seven kilometres away from the scene in the parking lot of Cherryhill Village Mall on Oxford Street shortly after the family was struck. Police were at the mall Monday morning but have since left  the scene.

During a news conference Monday afternoon, London police confirmed that there was evidence that the incident was hate-motivated but didn't go into specifics as to why.

"There is evidence that this was a planned, premeditated act and that the family was targeted because of their Muslim faith," said Det.-Insp. Paul Waight during the briefing.

Police also confirmed that the suspect wore a vest similar to body armor during the incident Sunday and that potential terrorism charges are being considered. Waight added there is no known previous connection between the accused and the victims. 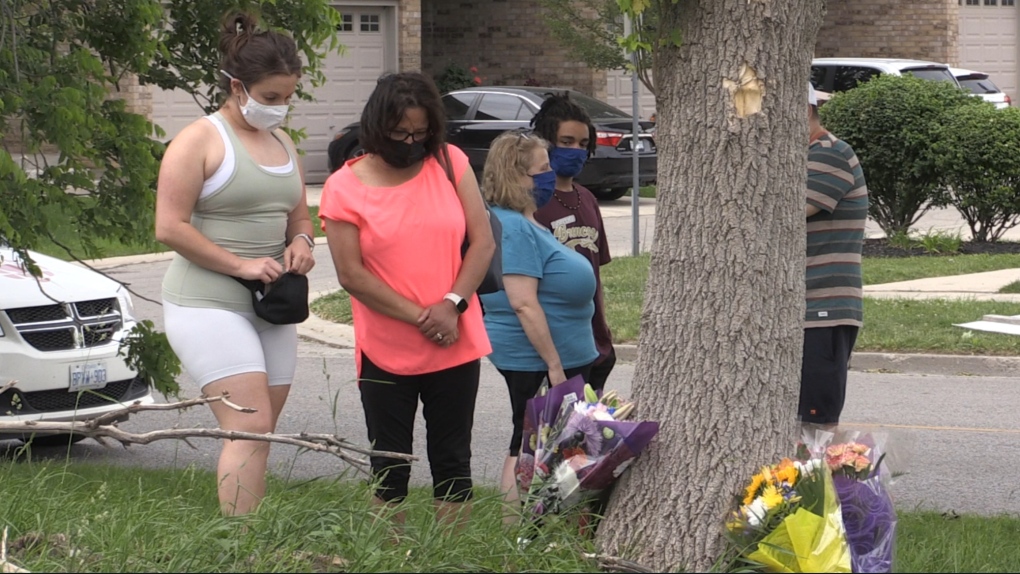 Makeshift memorial in London, Ont. after a Muslim family was killed in an alleged hate-motivated attack. (Daryl Newcombe/CTV London)

Veltman made his first court appearance Monday afternoon and is expected to appear again later in the week.

Police didn't release the names of the victims, asking privacy for the family at this time.

London Police Chief Steve Williams expressed his sympathy for the family and for the larger Muslim community Monday.

“We understand that this event may cause fear and anxiety in the community and in particular the Muslim community and any community targeted by hate. I want to reassure all Londoners that all of us on the call today and many others stand with you and support you,” Williams said.

"Let me be clear, this was an act of mass murder perpetrated against Muslims, against Londoners, and rooted in unspeakable hatred," he said.

Eyewitness Natasha, who wished only to share her first name, says she was on her way home from the beach with her family at the time of crash.

“We saw cars stopping and the first thing we saw was something moving on the corner...when we got closer we saw a kid with black hair,” she said.

Natasha explained in that moment she shielded her young daughter's eyes as she and her husband noticed two more people lying on the ground.

"(My daughter) was saying when we were home: the (child) was crying mommy, and it's dark now."

A second witness spoke to media Monday morning and described the scene as emergency vehicles arrived.

"It was just chaos. There were people everywhere and running," said Paige Martin. "Citizens were trying to direct the emergency vehicles where to go. There was a lot of pointing and screaming and arm waving."

Investigators remained at the scene Monday afternoon trying to piece together exactly what led to the deadly crash.

Nearly a dozen officers could be seen walking side-by-side looking for evidence. Hyde Park Road has since reopened to traffic. 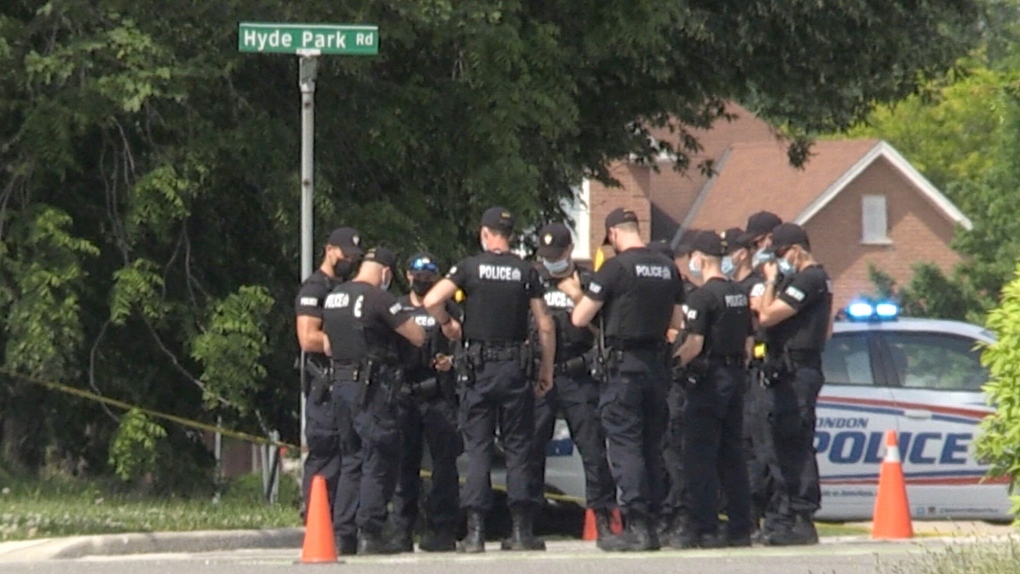 More than a dozen officers could be seen combing the scene of the crash on Monday June 7, 2021, in northwest London, Ont. where four people were killed. (Jim Knight / CTV London)

"I'm still in shock," said Martin, still visibily emotional. "I'm very shaken up knowing there's kids, multiple kids. It's awful, this family is just out for walk ... My heart is so broken for them today."

A vigil for the victims will be held Tuesday evening at the London Muslim Mosque parking lot.

A statement from a family spokesperson was issued to the media late Monday night:

"Everyone who knew Salman and the rest of the Afzaal family know the model family they were as Muslims, Canadians, and Pakistanis. They were always there giving and participating in spreading goodness. They worked extremely hard in their fields and excelled. Their children were top students in their school and connected strongly to their spiritual identity. Allah (swt) gave Salman, Madiha, Yumna and Yumna's grandmother the ultimate rank of a shaheed while Fayez us on the road to recovery from serious injuries. However, we need to understand that the destruction of a family in the brutal and horrific manner like this is something we must all stand against. We need to stand against hate and islamophobia and raise awareness in our communities and throughout all political spectrum. This young man who committed this act of terror was influenced by a group that he associated with, and the rest of the community must take a strong stand against this, from the highest levels in our governments to every member of our community with a sense of appreciation for humanity and justice."