"When I was a kid, 'Whitey' was two leagues ahead of me, and I used to go watch him play because we knew he was going to go all the way."

After Stapleton's passing last month, Keelan wrote a column in a local monthly publication, and began a push to rename the Sarnia Arena after the first person from the Imperial City to make the NHL.

"When he did it was a big deal for us here in Sarnia," says Keelan, who lives in nearby Brights Grove, Ont.

"He led the way for guys like Dino Ciccarelli, Ian and Tony McKegney and Wayne Merrick and others who came after. Most importantly to me was the contribution to the 1972 Summit Series."

As of Wednesday, he's received over 800 signatures, including Tony McKegney and three Sarnia city councillors. 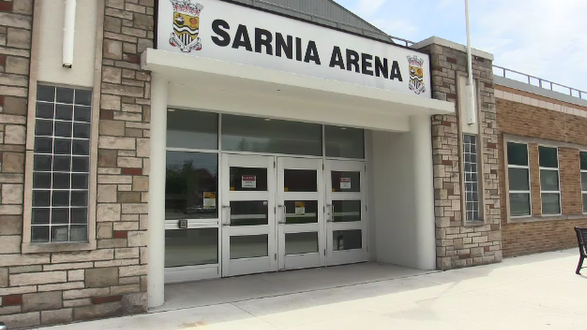 "I'm very supportive of this," he says. "We've named other buildings after people over the years. We've named airports after prime ministers. Years ago Cliff Hanson was the fire chief, and we named Fire Station #1 after him. I think it would be a nice tribute to 'Whitey.'"

However Mayor Mike Bradley is pumping the brakes. He wishes Keelan would have come to council first quietly to discuss it.

Bradley says there is a process that needs to happen, including public consultation, feedback and taking care of a half-dozen other buildings awaiting naming requests that are in the queue.

"I think Whitey contributed a lot to Sarnia, Strathroy and Canada and is worthy of recognition," says Bradley, who knew Stapleton personally.

"What council may decide that recognition is, it is to be determined once we hear from public. We've also had no contact from family to hear their wishes either."

Stapleton played two seasons for the Jr. B Sarnia Legionnaires from 1956-1958. The Current Legionnaires president has a different vision for the branding of the rink.

"I don't mind changing the name, but my vision is more simplistic," says Cliff Smith, president of the Legionnaires board of directors.

"I like Sarnia Memorial Arena, which would pay tribute to everyone including the late Shawn Burr. We could move the dedications inside the arena."

Smith says he's currently working on a project which would honour all the Sarnia legends via pictures or murals.

Keelan agrees history needs to be honoured and would like to see statues or murals of the Sarnia hockey stars inside the rink.

“When you come here to play hockey against us, you are coming into our house,” says Keelan.

“You should know who came from this place, who played here and who we developed into hockey players. When you are here, you are in our house now. I’d like to see that gets reflected in the experience they have at Sarnia Arena in the future.”

Keelan plans to present his petition to council in the fall when they meet again in person.