But Liberals say the focus should be on NDP tactics, not Liberal voter surveys.

Still, the NDP says the Graham team was out of line when it conducted and then released a push voter survey publicly.

“It is such a shame to see,” said Terrance Kernaghan, the NDP candidate in LNC. “It’s unfortunate to see where folks are playing in the mud.”

This week, the LNC Liberals released their survey, which shows the Liberals in the first place, followed by the PCs and the NDP.

The Graham campaign reports it was conducted independently over the phone with 325 respondents. 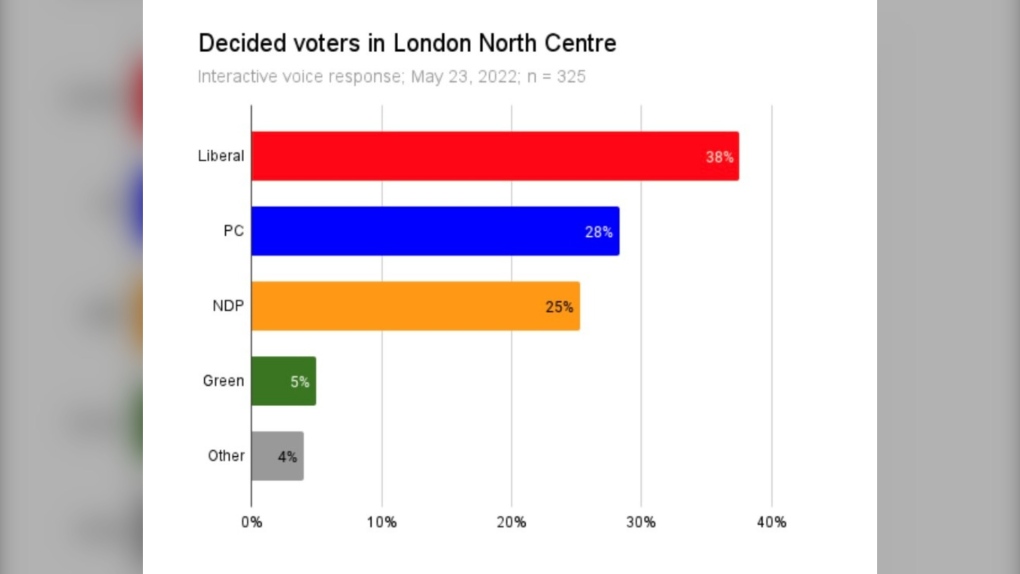 A voter survey released by the Kate Graham campaign indicates voter support for her campaign is higher than other parties. The Ontario NDP say the survey conducted by phone is inaccurate and “unethical”. The survey was taken from 325 respondents, but the NDP claims is is not scientific. (Source: Kate Graham campaign email) But in a media release, the Ontario NDP suggested the phone survey is not legitimate, adding it would not even be a legal tactic in a federal election campaign.

The release also included five political experts who also questioned the push survey, with one arguing it is wrong to suggest it was an “impartial scientific poll.”

A Western political science professor did not weigh in on the methodology of the survey with CTV News. However, Laura Stephenson concedes it is difficult to conduct accurate riding polls.

“Any riding is small, so we have to recognize that trying to do any polling in a very small area is going to mean really big margins of error and not huge sample sizes,” she said.

CTV News reached out to Kate Graham for an interview, but her team slated she was busy campaigning Thursday and instead offered a statement.

In it, she did not write about the survey, but stated in part, "I’m really disappointed that the NDP has decided to finish this campaign by attacking me personally.”

The controversy reached Liberal Leader Stephen Del Duca campaigning in Toronto. He echoed Graham but did not respond directly to a reporter's question about the survey.

“I think what unconscionable is for Andrea Horwath and the NDP to consistently now launch personal attacks against strong female candidates running for other parties,” Del Duca said.

Meanwhile, the NDP in London North Centre intends to press on and gauge voter support door-to-door.

“It [the survey] doesn’t represent exactly what we are hearing on the doors,” Kernaghan concluded.