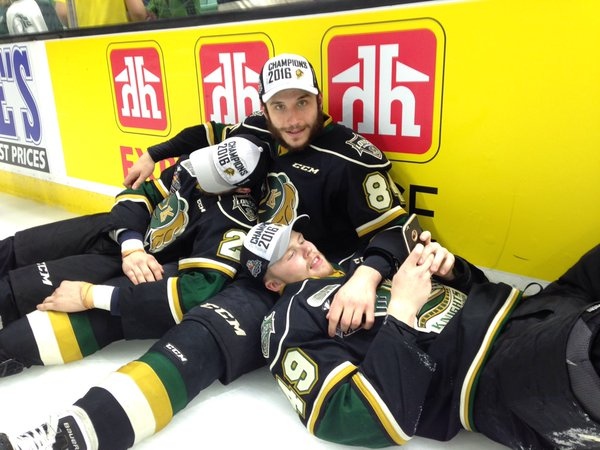 RED DEER, Alta. -- Matthew Tkachuk didn't care who scored the winning goal. All that mattered was that the London Knights could call themselves the best team in the Canadian Hockey League.

Tkachuk was credited with the winner 7:49 into overtime as the Knights captured the 2016 Memorial Cup on Sunday by downing the Rouyn-Noranda Huskies 3-2.

A grinning Tkachuk, who had been playing on a sprained ankle suffered during the OHL championship, said the goal may not have even been his.

"It actually might have hit off (Christian Dvorak's) back, it changed directions a little bit, doesn't matter, we'll both take it," said the draft-eligible forward.

"I felt something hit me but I don't really care, winning's all that matters," said Dvorak.

A Memorial Cup victory was fitting for the Knights, who dominated the competition, first in the OHL playoffs and then by going undefeated at this year's tournament. The last time they suffered defeat was April 1.

"To win so many games in a row through the playoffs and this tournament is a credit to these guys because we're playing good teams," said coach Dale Hunter. "These are all the top-end teams. To go 17 in a row is unheard of. Likely never be repeated."

It's London's second Memorial Cup in franchise history. Its other came in 2005, when the team was led by Corey Perry.

"We just want to be remembered just as much as that '05 Memorial Cup team," said Tkachuk. "That was the first one to win in London."

Most of the Knights celebrated the victory on the ice with friends and family. Finnish defenceman Olli Juolevi skated around the ice on a cell phone talking to people back home while tournament MVP and CHL player of the year Mitch Marner captured the moment with a camera strapped to his chest.

"They gave me a GoPro to wear. We'll see what kind of footage I can get," said Marner, who finished with 14 points in four games to lead all skaters.

Tkachuk and Dvorak scored for the Knights in regulation while Tyler Parsons made 29 saves. Dvorak's goal was his tournament-leading seventh, a proper way to end his junior career as he's expected to join the Arizona Coyotes organization next season.

"Unbelievable. No words for it, what else could you ask for? To go out as a Memorial Cup champion is the best way to go out," said Dvorak.

"We could have won that game. It happened that we lost, but we're still really proud of what we did," said Perron. "It was a such a great journey."

"It was a big challenge for us today, but we were confident to win this game," said Huskies coach Gilles Bouchard. "Our players played like champions, so I'm very proud of the team today."

London and Rouyn-Noranda were two of the top offensive teams in the CHL this season, but it was a goaltending battle in the finals.

"Their goalie was hot, you have to give him credit," said Hunter.

"(Marchand) played unbelievable tonight," said Parsons, who is the third-ranked North American goalie heading into this year's NHL Draft. "It's sad to see it end that way for him but it's great for us to win."

The Knights led 11-6 in shots after 20 minutes, but failed to score a first-period goal for the first time all tournament. Rouyn-Noranda seemed to have many of the 7,384 fans at Enmax Centrium rooting in its favour even though the Huskies eliminated the host Red Deer Rebels in the semifinal.

Tkachuk finally opened the scoring with 10:41 to play in the second, tipping in a saucer pass out of the air from Marner. The lead only lasted 15 seconds as Perron beat Parsons from the goal crease off a pretty feed from Timo Meier, who circled the net before finding his captain.

Nantel scored 9:13 into the third off a pass from Fortin to give the Huskies a 2-1 lead and London's first deficit of the entire tournament.

Dvorak came through for the Knights with the tying goal with 4:11 to play, taking a back-hand pass from Aaron Berisha and putting it blocker side on Marchand.

Hunter said Tkachuk's winner gave him flashbacks to 11 years ago when London was on top of the junior hockey world.

"It's hard enough to get here, but it's a lot harder to win it," Hunter said. "To come here and win four straight is unbelievable, just like 2005."

Notes: The OHL's Windsor Spitfires will host the 2017 Memorial Cup.