LONDON, ONT. -- The number of homes for sale in the London-St. Thomas area remains low, while demand continues to rise. The result is the average home price in the region climbing over the half-a-million dollar mark for the first time.

“No one is surprised that we are making it to that value, I think the big surprise is how quickly we got there,” says Blair Campbell, president of the London St. Thomas Association of Realtors (LSTAR).

Numbers released by LSTAR in the latest residential market activity report, show that over the last 10 years the average median price for a home has more than doubled.

Campbell says the trend of buyers coming from the Greater Toronto Area continues to grow, including those who retire and those who are now working remotely.

“They’ve been told by their employers that ‘You could be working from home indefinitely or it’s going to be a lengthy period of time.'”

According to Meyer, 83 per cent of homes that sold in August sold at or over asking price, and with an inventory of less than 700 homes currently for sale, that points to prices continuing to rise - making it difficult for those who are trying to enter the market or who have been waiting for it to cool off

“People who thought last year, that, ‘You know what, the market is hot, I know the bubble is going to burst at some point’ and they are going to wait to get in last year, are now over $85,000 further behind for getting into the market,"

The London area, now becomes the seventh market in the country to surpass the half-a-million dollar mark, with homes in the south end of the city seeing the largest increase in sales and price.

In total 931 homes were bought or sold, making it the second best August since LSTAR began tracking sales data in 1978. 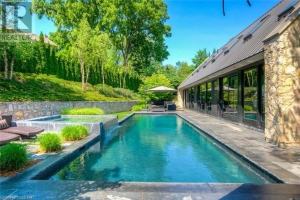 In pictures: Some of London's most expensive and luxurious real estate listings 2020