Spencer Yearley and Amber Weber are engaged — The Exeter couple christened a new “light tunnel” in Clinton’s downtown with a proposal Sunday night.

“Her mom and I kind of planned it out,” says Yearly. “We thought it was a good spot, with all the lights and Christmas trees. We kind of surprised her on it. Her mom wanted to take pictures, and then I snuck over here when they went to get some coffees. I was standing here when she came around that corner,” he says.

“He surprised me. It was a big surprise,” says Weber. “There were some surprised words spoken we can’t say on TV,” laughs Yearley.

Clinton’s light tunnel is the brainchild of Central Huron’s Community Improvement Co-ordinator, Angela Smith. She says the idea behind the downtown display was just to bring something new and bright to the town during the dark winter nights. 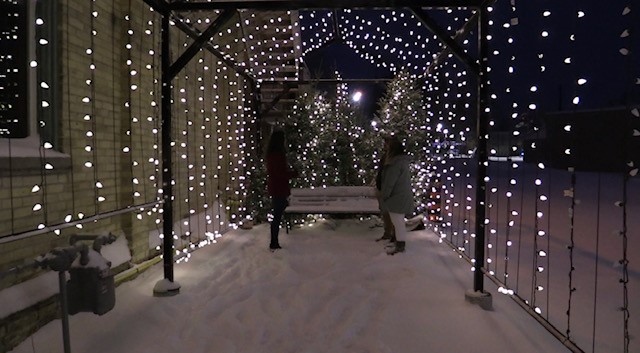 Clinton light tunnel on Jan. 5, 2022. (Scott Miller / CTV News)
“I had put forth that this might be an ideal spot for a small, intimate, outdoor wedding. So, the fact that this young couple got engaged here just two days after I turned the lights on was just icing on the cake,” says Smith.

The year round light display is located on Spooner’s Lane, also known as Lover’s Lane, which may prove more accurate than first expected.

“It is a beautiful spot. He did good,” says Weber. “That’s a win for me, I guess,” follows Yearley, who says they haven’t set a date or location for their impending nuptials, but will consider Clinton’s “light tunnel” as a possible wedding venue.

“I just got licensed to perform weddings, so that would be terrific to be able to perform the first wedding, in my tunnel,” says Smith.

The light tunnel is free to the public and will be a year-round attraction with changing light displays throughout the year.

Funding for the feature came from FedDev Ontario and the Main Street Community Activation Program.