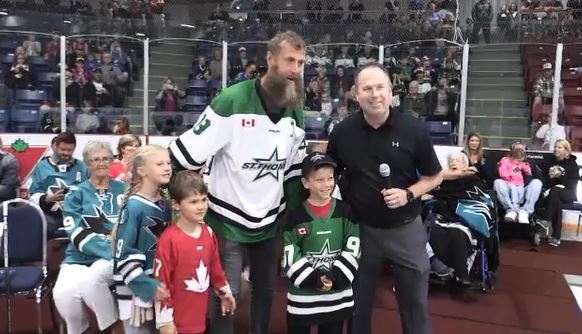 Joe Thornton was on hand as the St. Thomas areana was re-named in his honour.

An NHL all-star returned to his hometown for accolades Saturday.

Joe Thornton was on hand as the St. Thomas community renamed its arena in his honour.

Thornton spoke briefly to the crowd, saying it was an honour to see the arena named the Joe Thornton Community Centre.

The NHLer also unveiled a photo of himself in his San Jose Sharks uniform to be placed on the St. Thomas Wall of Fame.

Thornton is the 16th all-time leading scorer in the NHL.

He's played for the Sharks as well as the Boston Bruins, in a 20-year-career.

Thornton also skated on the ice with kids who brought their skates to be on the same ice pad as their idol.