Trucks are lined up to drive on what used to be Lake Huron, but is now Goderich’s expanded industrial harbour, which opened to traffic three years ago.

“Great partnership, and a long term lease that they can bring high quality aggregate by ship to Goderich, and then move it, by truck to different sites across Southern Ontario,” said Goderich Mayor, John Grace.

Goderich’s mayor said the infilling of four acres of Lake Huron is to make two additional docking spaces. A loading area for trucks — which is now leased by the Tomlinson Group — has been so good that he wants more. Another 8 to 10 acres of lake will be turned into land.

“The infrastructure is here. The studies have been done. We’re ready to expand, because originally we were going to expand it to 15 acres, but then we downsized it to four. But, now we’re ready to take that next step and add another 10 acres to the site,” added Grace. 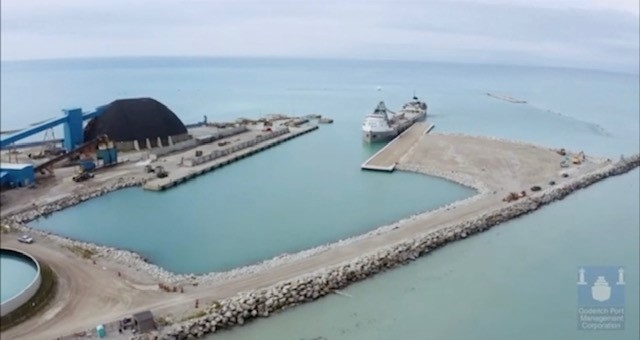 “It could be up to $40 million, this next expansion. And we will be looking for partners — public partners, private partners. Particularly with the federal government, to partner with us in developing this huge asset,” said Grace.

Whether it’s more aggregate, equipment, or other commodities, Grace said there are a lot of companies already interested in using Goderich’s latest, and yet to be built, harbour expansion.

“We need additional space. There’s lots of opportunity out there in the marketplace. And we need more space here at the Goderich harbour, and we look to expand it over the next few years,” said Grace.