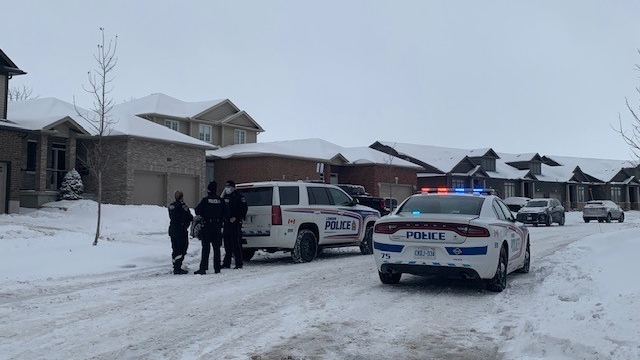 Police are investigating in the area of Beaverbrook Avenue and Whetherfield Street in west London, Ont. on Thursday, Feb. 3, 2022. (Jennifer Basa / CTV News)

The London Police Service (LPS) has laid charges following an investigation in the city's northwest end on Thursday.

Officers responded to the area of Whetherfield Street and Beaverbrook Avenue around 9 a.m. after a 911 call.

A 52-year-old man and a 45-year-old woman were injured and taken to hospital.

Police say the man remains in hospital in life-threatening condition while the woman has since been released.

A neighbour described seeing an older woman covered in blood and a younger woman running screaming from a home around the time of the incident.

Following an investigation, a 24-year-old London man has been charged with attempted murder and assault with a weapon.

Officials say the suspect and victims are known to each other.

The accused made a court appearance Friday and was remanded in custody pending his next court date on Feb. 8.

The Toronto police will be rolling out an increased presence across the TTC following a rash of violent, and sometimes random, incidents on the city’s transit system.

Canada and the United States are laying out the details of their new bilateral workaround for the Nexus trusted-traveller system.

Liberal member of Parliament and former cabinet minister Kirsty Duncan has announced that she is taking an immediate medical leave due to a 'physical health challenge.'