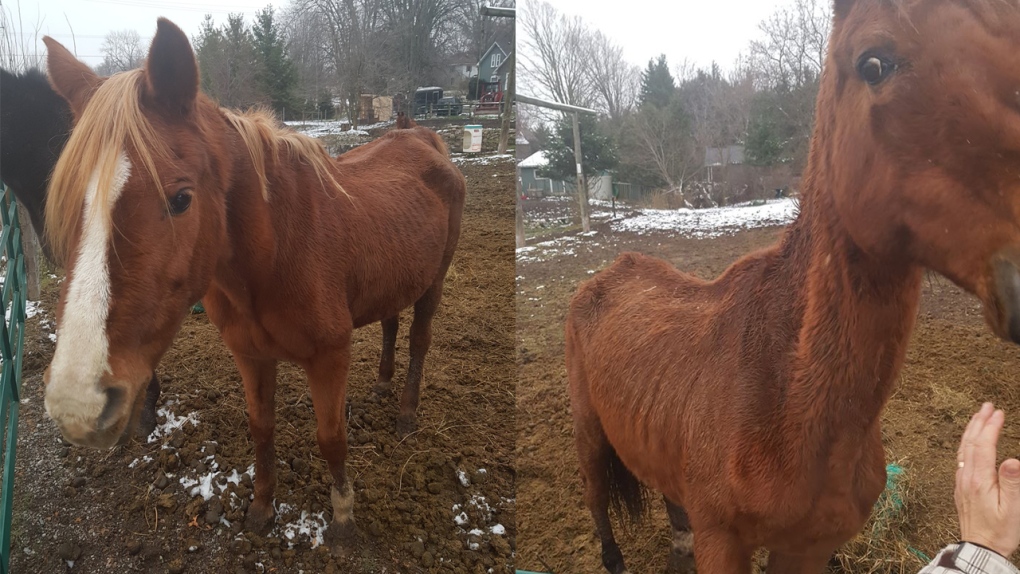 The deteriorating condition of three sick horses has pitted members of a rural Ontario community against the province's animal welfare agency, and the dispute reached the legislature on Monday.

Protesters have gathered for days outside a property in Norfolk County, Ont., about 90 kilometres southwest of Hamilton, where they claim the animals are being neglected by both the owners and the Ontario Society for the Prevention of Cruelty to Animals. The agency says the animals are sick, not neglected, and accuses the protesters of being "very aggressive."

Some of the locals say they have offered to care for the horses, place them in a sanctuary and cover the cost of their medical care, but the owners have refused to co-operate.

Natalie Tupper, who lives near the property, said she has called the OSPCA about the horses for months, but little has been done to help the animals. She said she reached her breaking point last week when she saw the horses outside in the freezing rain with little food available.

"I thought the horses were going to die," said Tupper, a horse owner herself.

She grabbed hay and carrots from her home and gave them to the "scrawny" horses.

"I gave them the hay, they ate it," Tupper said. "If they had food, they would never have gotten this far."

On Friday night, Tupper posted photographs of the horses on Facebook, then she called police.

A spokeswoman with the OSPCA said the agency has been investigating the horses' owners for more than a year now.

"What's being shared on social media and the actual story is not lined up," said Alison Cross. "One horse in particular that was euthanized this weekend was sick and in that condition due to its illness, not due to neglect."

She said the horses were under the care of the owners' veterinarian the entire time, adding that limited what the organization could do.

"It's not illegal to have a sick horse, we have to ensure the standards of care are being met, and they are," she said, adding the horses have adequate food, water and shelter.

"If the owner brought (the veterinarian) in and the vet suspects animal abuse or neglect, they are obligated to report it and we have not gotten that from the vet in this case."

Tupper said she returned to the property Saturday and saw some men trying to leave with one of the horses. She parked her car in front of the driveway, worried the horse wouldn't be cared for.

Both Tupper and the men called police, who returned to the scene Saturday morning -- and haven't left since, Ontario Provincial Police said.

Then the owner's veterinarian showed up, took the horse off the trailer and euthanized it within 15 minutes, Tupper said. The group then watched the horse being buried on the property.

The other two horses were kept in a garage, out of sight from the growing group of locals who showed up, she said.

OPP Const. Ed Sanchuk said officers went to the property around 6 p.m. Friday, and they immediately called the OSPCA.

"What we need to realize is we are police officers, we're not veterinarians," he said. "That's why we bring in the experts, the OSPCA and a veterinarian."

Sanchuk said they were mostly there for public safety since the protest began to grow over the weekend. He said the OSPCA was expected to arrive Monday to inspect the other two horses.

Cross said the OSPCA will follow up on the property, but do not want to provide details in order to protect their frontline officers.

Tupper and Brenda Thompson, who owns the nearby Whispering Hearts Horse Rescue, said they are angry that the OSPCA hasn't shown up since police notified them on Friday.

"There was no need to go on the weekend," Cross said, adding that both police and a veterinarian were there.

Toby Barrett, who represents the area in the provincial legislature, visited the property Sunday night. On Monday, he took the concerns of his constituents to Queen's Park.

"There is a crisis with three horses, one was put down and buried by the time I got there," he told the legislature. "People want to know why the OSPCA wasn't there."

The OSPCA has come under criticism in recent weeks following a Canadian Press report that the agency plans to no longer investigate cruelty cases involving horses and livestock due to lack of funding. Cross said that plan is not yet finalized and the agency will continue to respond to those calls in the interim.