The famed Holy Roller tank has been lovingly restored and is on its way back to Victoria Park.

After a year at Fanshawe College’s Centre for Applied Transportation Technologies School, the newly refurbished Holy Roller was unveiled in a special ceremony Monday.

Welding student Felecia Cutler was among those in attendance. It was a moment of personal pride for her to see it roll out of the large bay doors — that’s because she worked on the project. She said she understood the enormity of taking on something of such great significance to so many people.

The Holy Roller is one of two Canadian tanks to fight in WWII from D-Day until the end of the war. It was brought to London in 1950 to serve as a war memorial. It sat at Queens Park on Dundas Street East for the first six years, and was then relocated to Victoria Park in 1956, where it remained thereafter. 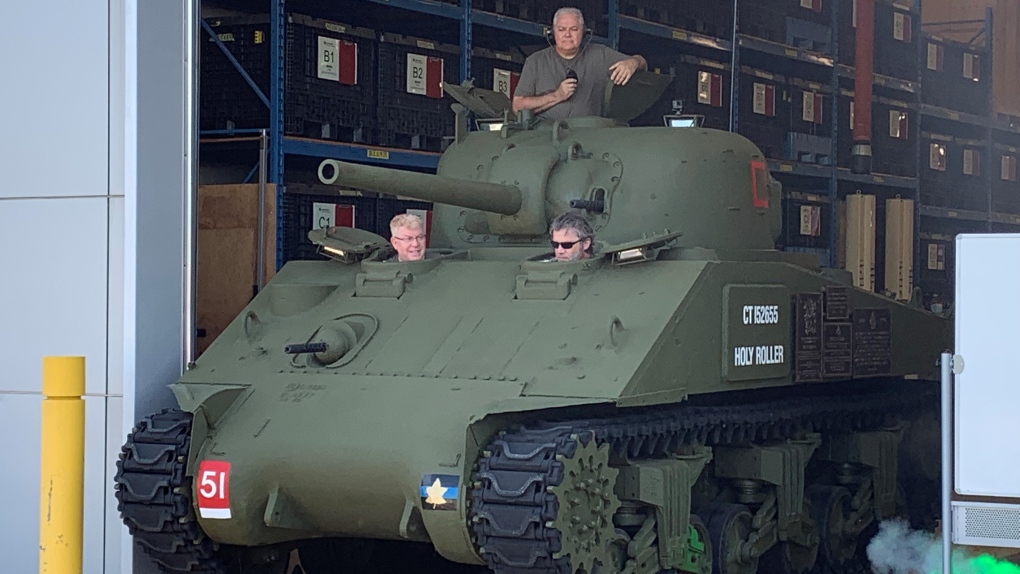 Restoration of Holy Roller tank being unveiled at Fanshawe College on May 30, 2022. (Bryan Bicknell/CTV News London)Decades of wear and tear have taken their toll on the once might Sherman tank. It was brought to Fanshawe for refurbishing in June 2021.

Deputy Project Director Sgt. (Ret.) Gary Cambridge said it was a labour of love by countless volunteers and students.

“This tank was stripped complete. Everything was stripped off it. The gun was off, the road wheels were off. The suspension system was off. So we gutted it, and then we cleaned it up, painted it, and reassembled it,” he said.

Project Manager Lt.-Col. (Ret.) Ian Haley was also on hand for the unveiling, and admitted that many people today are put off by war, but he said they have to remember freedoms Canadians enjoy also come from sacrifice.

“It’s a part of their history. It’s a memorial to Londoners and Canadians who fought, and that there’s a price for freedom,” said Haley.

The Holy Roller will be moved back to Victoria Park Tuesday. Central Avenue between Wellington Road and Richmond Street will be closed to facilitate the return of the tank to its resting place at Victoria Park.

A rededication ceremony and D-Day parade are also set for this Sunday.

Fanshawe College President Peter Devlin, a retired lieutenant general himself, said it’s a proud day for Fanshawe College, and for the 1st Hussars, who served in WWII.

“The Holy Roller is a memorial. It’s a powerful symbol of freedom. And we’re all so glad it’s en route back home to Victoria Park,” he said.

The 78th anniversary of the invasion of Normandy is June 6.