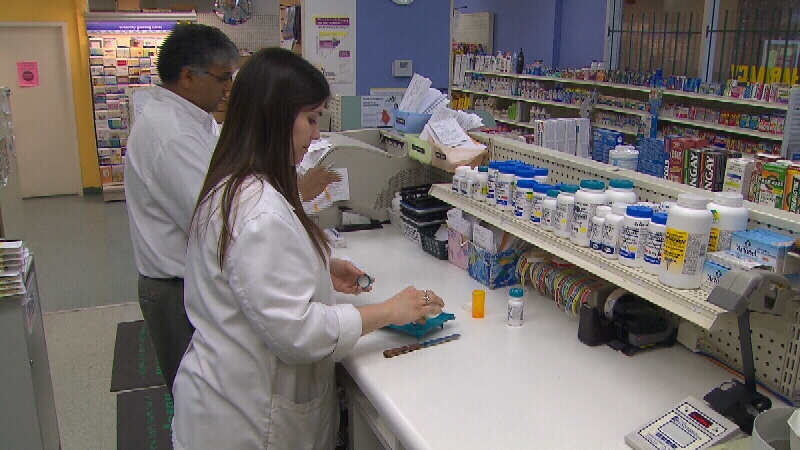 TORONTO -- Pharmacists in Ontario could one day prescribe treatments for minor health issues such as pink eye or skin rashes.

The Progressive Conservative government announced in its recent budget that it intends to expand the scope of practice for certain regulated health professionals, such as pharmacists, nurse practitioners, dental specialists and optometrists.

"Sometimes people aren't able to get in to see their physician, for example, during the course of the day, but they can go in on weekends, they can go in the evenings to see the pharmacist," she said. "If it's a low-grade issue, then we believe that there are certain things that pharmacists should be able to treat."

Pharmacists may also be allowed to administer the flu vaccine to children under five, Elliott said.

The specifics will have to be hammered out with the health professionals' colleges and governing bodies, she said, and it could take up to a year for any changes to be in place. Additional training would likely be required.

"I think all health-care professionals recognize that in order to integrate care and centre care around patients it's going to be important to work together," Elliott said.

Such changes would reduce the time patients have to spend travelling between multiple health-care providers for tests, routine care and treatment, the government said.

Pharmacists have been calling for expanded scopes of practice, telling a pre-budget committee several years ago that it would help keep patients out of hospitals and therefore save some costs to the system.

"We also look forward to the day when Ontario pharmacists have the authority to administer a common ailments program or to offer therapeutic substitution to patients and provide other professional services that are already available and well used in other provinces," chair of the Ontario Pharmacists Association board Sean Simpson said.

"Enabling pharmacists and other allied health professionals to expand their scope of practice creates greater capacity elsewhere in the system, improves access, and is a safe, cost-effective alternative to physicians' offices and emergency room visits."

The president of the Ontario Association of Optometrists said an expanded scope for its members could include expanded prescribing of drugs, or even the ability to order CT scans, MRIs or blood tests.

"An optometric exam is also a little bit like a neurological exam," said Joshua Smith. "Changes to the optic nerve can sometimes indicate problems that are not eye specific, but brain specific."

The Ontario Medical Association said expanding scopes of practice are appropriate when they don't raise patient safety concerns, are subject to a rigorous regulatory structure, support a collaborative approach to care, and "are consistent with the knowledge, skill and judgment of those involved."

The government also said in the budget that reducing regulatory barriers to up-to-date drug therapies would also lessen the need for referrals to other providers, who could then focus on more serious issues.

NDP Leader Andrea Horwath said she was eager to see details of any proposal, but has concerns both around patient safety and if patients would have to pay out of pocket.