'It's sleepless nights': Non-essential business owner has no money for rent

LONDON, ONT. -- As of March 25, any non-essential business was ordered closed. That left Paula and Jason Spears, who are co-owners of All Star Cuts, faced with keeping a business alive without any income.

“Right now we don’t feel like we are getting enough help,” says her husband Jason. “We understand that this is an ongoing situation so we expect it to come eventually, but right now we’re asked to pay rent at the beginning of next week and it’s just not there.”

The landlord, Fred Naclerio, says he is trying his best to work with tenants but he has a mortgage too.

“We’re a small business just like they are,” Naclerio says, “50 per cent [of the rent] is the actual base rent that comes to me that I pay my mortgage with and overhead with. The other 50 per cent is property taxes, utilities, property management. Our standpoint is maybe we will survive deferring for a month. We’re working with our lenders [but] the response time isn’t as quick as I was hoping.”

The Spears were sent an email by the landlord advising them to seek financial assistance with the provincial government in partnership with the BDC, which has announced an emergency funding program for small businesses. 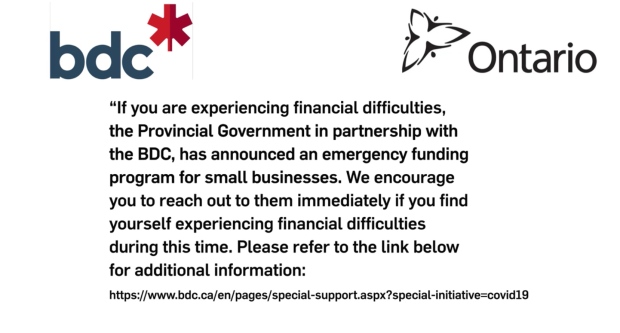 “Asking us to take out loans isn’t going to help our situation,” says Paula, “I can’t come out of this in three months, four months, five months in more debt.”

Mark Weisleder, senior partner with the law firm Real Estate Lawyers.ca LPP, says that tenants and landlords need to come together in a critical time like this.

“Commercial landlords have to be very careful before they take very harsh remedies even if they are entitled to them. I think they should also work with tenants to find a solution that works with everybody during these very paralyzing times,” Weisleder says.

“The landlord is concerned that if they aren’t getting rent they can’t pay their mortgage and then their bank might try and take away their property…Many lenders are working with landlords saying, 'You know what, your interest payments for the next four months well just add them to the principle under your mortgage.' You’ll still owe the money but you’ll be able to get through this time and make payments at a later date,” Weisleder said.

The Spears are appealing to the government for financial help when it comes to rental payments.

“Because without that we won't have a business to come back to."