Former inmates of the Elgin Middlesex Detention Centre (EMDC) say any time served at the facility is a death sentence after the Halloween murder of 29-year old Adam Kargus.

That is being used as the catalyst for a $325-million class-action lawsuit against the province.

The suit is being launched by two former inmates, both of whom were assaulted by other inmates during their time at the jail.

The lawsuit claims that overcrowding, unsafe and unsanitary conditions have helped to fuel a culture of violence; resulting in a violation of inmates' rights.

It's those conditions that Shane Kargus, Adam's brother, says led to his death.

"My brother died alone and with no protection and I put the blame on the guards. I think it's sick they were even paid for that day's work," says Kargus.

Although not part of this particular lawsuit, Adam Karhus' family is represented by Kevin Egan and makes many of the same claims including:

"People are getting pissed on, pretty much daily, because they have to sleep with their head next to a toilet. Does that make sense? Is that humane?" asks Kargus.

Glen Johnson spent 7 months at EMDC in 2012 and is one of the plaintiffs in the suit.

Johnson claims he was physically and sexually assaulted, even stabbed with a pencil, but when he asked to move to a different part of the jail he was denied.

"When they are put in there and they are subjected to this kind of inhumane treatment, their charter rights are being breached and they are entitled to compensation and it cries out for correction," says lawyer Kevin Egan

The lawsuit covers all inmates incarcerated at EMDC between January 2010 and August 25, 2013.

None of these claims have yet been proven in court. 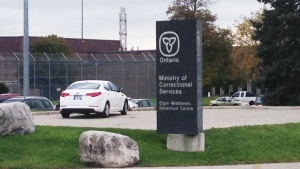