'For me it was a rollercoaster': Woman shares her struggle of being caught in cycle of debt due to high-interest loans

'For me it was a rollercoaster': Woman shares her struggle of being caught in cycle of debt due to high-interest loans

A small gathering of anti-poverty activists gathered for a noon hour protest Tuesday outside one of the many storefront lending operations located across London, Ont.

The demonstration was spearheaded by an organization called the Association of Community Organizations for Reform Now (ACORN). They continue to call on federal and provincial governments to put new limits on interest rates.

About a dozen members of ACORN rallied outside the Money Mart at Wellington Road and Commissioners Road.

Betty Morrison was one of the speakers at the gathering. She has been in a cycle of debt for more than 20 years, and said it started with a high-interest, payday loan.

Morrison said she once cleared her debt but is currently on the Ontario Disability Support Program (ODSP) and said people living in poverty feel trapped, admitting that she took out another high-interest loan the day before the protest in order to buy food. 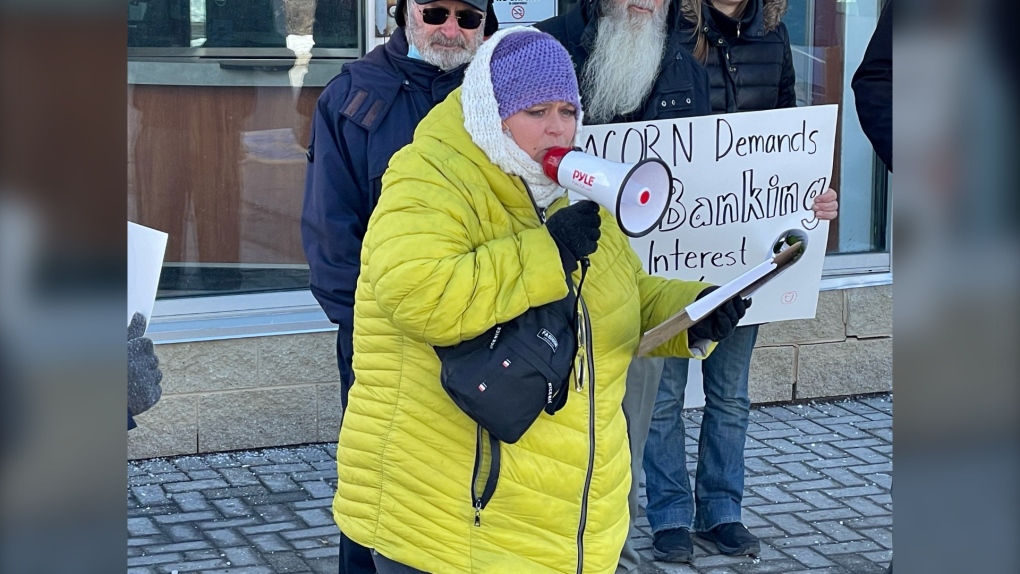 Morrison said lower-interest, bank loans are not an option, and told CTV News London, "They don't even look at me. Nobody listens to me when I go in there with my credit rating. You're no good."

One of the key changes ACORN is seeking is for the federal government to reset what is called the criminal rate of interest — that rate is currently 60 per cent. ACORN wants it to be 20 per cent plus the Bank of Canada rate, or 30 per cent, whichever is lower.

They also want all lending costs to be contained in that rate, curtailing what they call predatory interest practices.

“They extract money from those who are least able to afford it,” said ACORN London member Claire Wittnebel. “They're taking advantage of the folks who are most in need."

This was one of eight protests taking place across the country as part of what ACORN calls a National Day of Action for Fair Banking. At one point the protestors went into the Money Mart, looking to deliver a letter to staff that could be passed on to the head office. Staff did not come to the counter prompting shouts of "shame, shame."

The demonstrators left the letter on the counter and exited the business.

Soon after police arrived and moved them onto the street, and the gathering dissolved a short time later.